Coronavirus: Racing behind closed doors not ruled out by HRI

Three fixtures in France will have admittance restricted to racing professionals 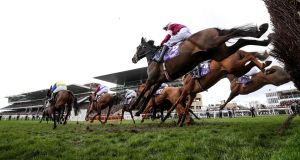 There is growing uncertainty about next week’s Cheltenham festival and whether or not it can go ahead as planned. Photograph: Dan Sheridan/Inpho

Horse Racing Ireland has said the option of running meetings behind closed doors due to the coronavirus threat cannot be ruled out but stressed such a dramatic step is not currently on its agenda.

Uncertainty over the spread of Covid-19 and its potential impact on sporting events has spread to racing in France with three fixtures due to take place behind closed doors there this week.

Two meetings at Compeigne and one in Chantilly will have admittance restricted to racing professionals.

That follows consultations between the French racing authorities and civic officials in the municipality of Compeigne.

It is the first time such a step has occurred in Europe although meetings in Japan and Hong Kong have been similarly affected.

On Friday, the French government announced a temporary ban on gatherings of more than 5,000 people due to the spread of coronavirus there.

With cases of the virus also increasing in Britain – including a case in Gloucestershire – there is growing uncertainty about next week’s Cheltenham festival and whether or not it can go ahead as planned.

The British Horseracing Authority have said they are in communication with government officials and that contingency plans exist although they also stressed there is currently no need to develop a policy regarding abandonment of specific fixtures.

However, the French step of restricting social gatherings to less than 5,000 follows the move in Switzerland to limit such crowds to a thousand or less.

Should the British government follow a similar policy it would have huge consequences of Cheltenham, which is expected to attract almost 250,000 people over four days.

Whether adopting a behind closed doors policy is financially sustainable for the owners of Cheltenham, Jockey Club Racecourses, is debatable. They also haven’t commented on insurance implications of any such move.

But any potential rescheduling to April risks a logistical headache in terms of clashes with the Aintree and Punchestown festival in particular.

The first case of the coronavirus in the Republic of Ireland was confirmed on Saturday. The country’s chief medical officer has already said cancellations of mass gatherings are not a significant part of steps to manage the spread of the virus here.

On Sunday Horse Racing Ireland’s chief executive Brian Kavanagh again said he is encouraged by that position and added that any restriction policy on social gatherings similar to the French would have an impact on only a number of fixtures here.

“I think the French restriction is to 5,000 or more so from a racing point of view that’s likely to arise as an issue only with Fairyhouse, Punchestown or perhaps the opening of the Curragh at the end of the month. But we’re not in that space at the moment,” he said.

As for a potential future scenario of racing behind closed doors, Kavanagh added: “You would have to do a risk assessment on the situation. Obviously Hong Kong and Japan are right in the centre of this outbreak and have had multiple fatalities and multiple diagnoses.

“You would be reluctant to go down that road [racing behind closed doors] unless necessary but it is an option obviously if such things had to be considered.

“It’s not a like for like situation at the moment. It’s not part of our plans but that option is always there.

“It was there for the rugby and lots of other sporting events. Football matches are being played behind closed doors in Italy so that could be considered. But it is not on our agenda at the moment.”

The immediate priority for racing fans is the prospects for next week’s Cheltenham festival.

Up to 15,000 people are expected to travel from Ireland for National Hunt racing’s biggest meeting and Irish trained horses to the forefront of the betting on most of the big races.

Gordon Elliott, the festival’s leading trainer in 2017 and 2018, summed up the feelings of many when he said on Sunday: “I don’t know much about it but I hope we can keep going.”

Elliott was speaking after Larquebuse justified 2-1 favouritism under Davy Russell in a maiden hurdle.

He later scored in the featured €50,000 handicap chase with the bottomweight Gun Digger whose jockey Gavin Brouder made a good first impression on the trainer.

“It’s the first time I’ve met him. He seems a nice fella and is good value for 7lbs. He gave him a good ride,” said Elliott whose odds-on bumper favourite Homme D’un Soir could later manage only third to Joseph O’Brien’s Lunar Display.

Willie Mullins also scored with the hitherto disappointing Jon Snow and such results suggest the two most powerful operations in the country are in rude good health with nine days to Cheltenham.

Barry Geraghty’s intended book of festival rides includes the Champion Chase favourite Defi Du Seuil and Epantate who is still towards the top of the Champion Hurdle betting despite a coughing scare last week.

Geraghty missed out on Cheltenham 2017 when a fall at Kempton a couple of weeks beforehand left him with a punctured lung.

The champion jockey reunited with the horse he got that fall from, Charli Parsc, in a conditions hurdle on Sunday.

Now with trainer Aidan Howard, Carli Parcs made light of a near-18 month absence to cruise past Jetz in the closing stages.

“He has the bit of class to travel and Barry gave him a great ride. I hope he’ll improve a little,” Howard said.