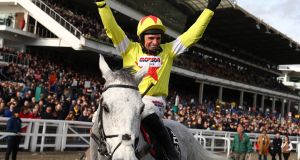 For years to come Politologue’s shock success in Wednesday’s Queen Mother Champion Chase will serve as a reminder about the dangers of taking anything for granted at the Cheltenham festival.

The supposed race of the meeting looked to be robbed of most competitive meaning on Wednesday morning when the big Irish hope Chacun Pour Soi joined Altior on the sidelines due to a foot problem.

It looked to leave the last of the supposed ‘Big Three’ Defi Du Seuil with little more than a penalty kick to secure his owner JP McManus a first ever Champion Chase success.

On an afternoon when the sport’s biggest owner saw his famed green and gold silks carried to a superb 1,019/1 four-timer ‘Defi’ looked a 2-5 ‘lock’ in a depleted championship left looking more coronation than competition.

Yet despite Champ’s unlikely RSA success, victories for Dame De Compagnie (Coral Cup) and Aramax in the Boodles Handicap, as well as McManus’s French hope Easyland pulling off the improbable task of beating Tiger Roll in the Cross-Country, it still somehow didn’t happen for the Irish owner in the big one.

Left with seemingly straightforward task to jump around and pick up the pot Defi Du Seuil couldn’t make the frame in a five-horse race.

Politologue wasn’t even the pick of Paul Nicholls’ two runners. Harry Skelton had never ridden Politologue before, nor had he ridden in the race before. But the partnership grabbed the initiative from the start and never let go.

Neither did Defi Du Seuil ever look like prising it away.

“He was never really going. I was trying to nurse him into it but I knew from the back of the third last the game was up,” Geraghty explained afterwards.

Ultimately it was a sixth win in the race for Nicholls, putting him joint top on the roll of honour with Nicky Henderson and the legendary Tom Dreaper.

With no festival runner on day one the 11-times British champion trainer watched the action in a pub. He wasted no time making his presence felt on day two.

The result was the one negative for the McManus team who have dominated the first two day’s action, including Tuesday’s straightforward Champion Hurdle with Epatante.

The most productive single day in McManus’s long Cheltenham history brought to mind the spectacular 82,653/1 four-timer his rival Michael O’Leary enjoyed on the final day of the 2014 festival.

Unlike Epatante there was nothing elementary about Champ’s unlikely success as the horse named after AP McCoy revealed some of the former 20-times champion jockey’s famous never say die spirit.

Both Minella Indo and Allaho looked to have burned him but blunders at the final fence didn’t help them. Neither did Minella Indo’s apparent tendency to idle and by the time he had a rallying Champ to aim again the race was over.

Champ’s trainer Nicky Henderson had turned away believing an honourable third was on the cards and Geraghty admitted to thinking the game was up.

“After the second I wasn’t making up any ground and struggling. But I knew when I committed to pop the last that the two in front hadn’t jumped brilliantly. So on landing on the back of it I was smelling money again!” he said.

A smell was all some bookmakers were left with after the Coral Cup as Geraghty got the better of a duel with Davy Russell on Black Tears to take his career festival tally to 41.

“The injuries and things that Barry has had over the years and the number of good rides that he has missed: these wise old owls are pretty good guys and I am genuinely thrilled for him because he has been great for the game and he still works,” said Henderson.

The Englishman has cemented his grip over Willie Mullins as the festival’s most successful ever trainer with his haul now on 68.

In contrast French trainer David Cottin experienced his first festival success when, on testing conditions, the French raider Easyland ran the finishing kick out of Tiger Roll at the end of the Glenfarclas Cross-County.

Easyland was ridden by another Frenchman Jonathan Plouganou but McManus’s old ally Mark Walsh did the honours on Aramax in the Juvenile handicap hurdle. The 15-2 shot had a length in hand of Night Edition at the line.