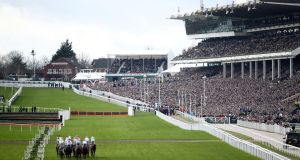 Thousands of punters pack the grandstands at Cheltenham this week as the festival continued as normal – despite the public concern over coronavirus. Photograph: Tim Goode/PA

Damned if the horsey set - waxy of jacket, Range of Rover, tweedy of cap, jaunty of stride, always up for a stiff one, never afraid of a sneaky fag and always slightly baffled by the fact that the entire world is not swooning over this filly or that four-year-old; damned if the Festival of festivals, that never-sunny, glorious corner of England where the atmosphere is always 1986 and Dawn Run cantering into history while beetroot-faced men hurl trilbys and fedoras in the air and the women exude a Jackie Collins glam and where there’s always time for one more glass of bubbly . . . damned if this timeless paradise of horse-iness is going to be thrown off course by some poxy little global pandemic.

If you’re lost in Cheltenham world, then you’re probably confusing coronavirus with that crafty tip you got late Wednesday night, one to keep an eye on in next season’s novice hurdles.

If you were in the thick of it at Friday’s Gold Cup, then you are a man or woman among the immortals, breathing in the God-given spring air of the Cotswolds and glorying in the chance to see, in the flesh, with the crowd, Al Boum Photo galloping towards horsey immortality and joining the sepia-tinted exploits of L’Escargot and Arkle by winning back-to-back Blue Ribands in the Gold Cup.

You are, see, high on the wine of life and hopefully making a few bob too – but it’s not about that, dammit, Cheltenham’s not about that, sure as long as you break even you’re doing well – and you mean NO HARM by going along, you are just keeping up the sacred tradition like your auld fella and his auld fella before him, because you ALWAYS go to Cheltenham and sure you wouldn’t miss it for THE WORLD.

You are all that, yes.

Fifty quid down to win and four pints of bitter, good man. Here, keep that for yourself. And maybe there’s a tiny voice in the back of your mind – your grandkid’s voice, say – telling you that you are being oafish and unbelievably selfish here. That you’re being a fool here. Each Way. But ignore that. The crack is too good. You are here for a good time, not for a long time.

Anyone immune to the charms of racing knows someone whose existence seems to revolve around Cheltenham race week. Flinty-eyed realists for 51 weeks of the year – sensible men and women and nobody’s fools – develop a dreamy look whenever they say those four words: “I’ll be at Cheltenham”.

Men in particular talk of the place with the same adulation as Sinatra used to talk about Ava Gardner. They talk about Cheltenham as though it is a state of mind.

From the outside, to the rest of the world who might flick on the box on a Friday afternoon to maybe watch the big race, it’s hard to see the immediate appeal.

To the uneducated, it’s just another big English race course; lush grass and greying skies, slightly chilly and decorated by the presence of the minor cast of Buckingham Palace and nary a vegetarian within a hundred miles.

You imagine jammers hotels and muddy car parks and designer galoshes and endless queues at the bar and endless chatter about bloodlines and trainers and stallions and yearlings and the slog to and from the racecourse. And you think: whatever turns you on.

But then you see the joy, the absolute joy in their eyes and racing may be the sport of kings and all that but it belongs to everyone. Whether it’s the horse owner or trainer or jockey or the punter: thine eyes have seen the glory.

And it’s their secret, see. Cheltenham has always existed beyond the realm of the ordinary. The world of racing is a hardy, energetic, tough-souled one that disdains hysteria and hype and much of the vapid nonsense of the outside world. And the Cheltenham crowd was not about to let the hype about this virus spoil their day out. Their week out.

They are not stupid. They don’t just read the Racing Post, you know. They’ve seen the headlines. They know what the lads in the World Health Organisation are saying. But listen, as long as the horses can’t get it, sure what odds? And who in WHO has ever stood close to the railings to watch that 100 quid at 16-1 come home in the Handicap Hurdle?

When you’ve been moving with the crowd in Cheltenham for the past few days, it must be easy to feel devil-may-care and fearless and to scoff at the panicky outside world. How much harm can a bit of a flu do? Have a drink! Live! It’s three deep at the bar and the jokes about ‘social distancing’ are coming thick and fast.

That’s why the Cheltenham-goers who spoke to this publication were able to bat away the absolute strangeness and fear that has taken hold across the world.

“Madness what’s going on at home – life needs to go on.” “It’s like worrying about getting old.” “I just don’t think we’re going to get it. But if you read about it you’d be worried.” “It’s a pattern – you don’t like to change your lifestyle.”

And this is so true. You don’t, of course. You don’t want to miss Cheltenham. Just as you don’t want to work from home or maybe, in the coming weeks, not work at all or to see your business destroyed or to see your children come home from school not certain when they will return or to witness the eerie experience of everything – entire countries – closing down indefinitely.

It’s easier to just pick up the auld form book that was left lying on the bar counter and leaf through it and have another dram and feel good about yourself and, as yer man you bump into every year here says to you, sure what’s life if not for living and to laugh then at your outrageousness as ye shake hands anyway – because that’s what you do at Cheltenham.

But on Saturday, now, the Cheltenham crowd will scatter. All that bonhomie, all the togetherness, the unbeatable elation of the finish, all that shared appreciation of horse flesh is gone with the wind. A few pound left in their pockets, hopefully, and maybe a muzzy head because, Jesus, it was a good festival. And maybe then the headlines on the TV at the (strangely deserted) airport or on the newspaper stands begin to sink in.

A thousand dead in Italy! Isn’t that wild altogether? How in the name of Jesus did they let that happen over there? The Cheltenham crowd will head to their tens of thousands of homes, in England, in Ireland, and they’ll decide to themselves that they’d better keep the head down now anyway, just to be safe, to look out for their loved ones and all that.

If they’ve a tickle in the throat, it’s just the few cigars. They might be aware that the outside world has been watching Cheltenham this year in a new way: as something macabre and grim and maybe just irresponsibly dangerous. They might privately begin to think that maybe, just maybe, the festival could have been called off on Wednesday, even on Thursday.

But then, the outside world has never understood racing: the thrill of the finish, the artistry of the jockeys and the wit, all those stories, all those one-liners, told again and again at the bar long after closing. It’s the laughter, see, the fun: you don’t want it to end.

And what was it Jack Leach said about the great Lester Piggott? “A face like a well-kept grave” – wasn’t that it?

And what was it that Lester himself was meant to have said years ago about the crowd? Didn’t Lester say: “Punters are stupid bastards, aren’t they?”