Irish fans among the 65,218 at Cheltenham on Thursday as Festival continues 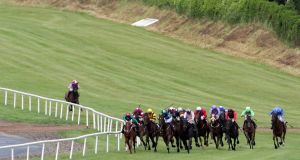 Only runners, riders and trainers will be in attendance at Down Royal next week.

Dundalk’s fixture on Friday evening will be the first Irish race meeting run behind closed doors as Horse Racing Ireland announced all fixtures will be closed to the public until March 29th.

The board of the sport’s ruling body made the move on the back of government advice issued on Thursday morning to try and contain the spread of Coronavirus.

That included instructions to limit external gathering to less than 500 people. The step means racing will continue in Ireland but will not be open to spectators which is in line with other major jurisdictions worldwide.

It occurs as the Cheltenham festival continues in Britain where Thursday’s official attendance, which included many Irish race fans, was reported at 65,218.

The decision to let the Cheltenham festival go ahead has been heavily criticised this week but racing here has moved quickly to keep in step with new government guidelines.

There will be restrictions on who can attend race meetings over the coming weeks with no bookmakers, Tote services or catering allowed. One groom and one owner per runner will admitted and recommended social distancing measures will be implemented on track.

Only trainers of horses running at a meeting will be allowed in. All participants will be asked to vacate the racecourse after their horses have run.

The situation will be kept under constant review but crucially the arrangements will allow racing to be made available to broadcasters.

TV pictures are the financial backbone of most tracks with each individual race worth at least €7,000 to them in media rights revenue.

HRI’s move was taken after consultations with the Department of Agriculture, Food and Marine. The body’s chief executive Brian Kavanagh said: “It is important that horse racing acts responsibly and plays its part in the efforts to limit the spread of Covid-19.

“That is why we are announcing with immediate effect that horse racing fixtures in Ireland will continue between now and March 29th but will be run behind closed doors with very restrictive access.

“Race meetings will not be open to the public, in line with measures taken by other international racing jurisdictions such as France, Hong Kong and Dubai.

“Public health is the number one priority and these restrictions will continue to be kept under constant review as we liaise with our colleagues in the department of agriculture, food and marine and the department of health.

“These restrictions which we are announcing today will limit social interaction but will allow a vital rural industry to operate, protecting livelihoods and jobs.”