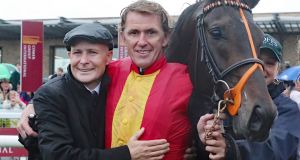 The unfortunate circumstances Pat Smullen is facing somehow seemed to produce a perfect synchronicity on Sunday at the Curragh.

Ordinarily the nine-times champion jockey would have ridden the Comer Group Irish St Leger winner Search for a Song. He spent two decades riding for her owner, Moyglare Stud, and trainer Dermot Weld until forced to retire in May after being diagnosed with pancreatic cancer last year.

Shortly after his retirement the 42-year-old multiple classic winner organised the Champions Race for Cancer Trials.

The idea of bringing iconic names such as AP McCoy, Kieren Fallon and Johnny Murtagh out of retirement to raise money for cancer research was an inspired one.

Just how inspired can be gauged from how four Group One races were up for grabs on Sunday – and €2.6 million in prize money – and yet no one doubted that essentially a novelty event trumped everything.

The blow of Smullen not being able to ride in his own race, after a health setback last month left him requiring more chemotherapy, was lost on no one.

Just as everyone knew that AP McCoy ultimately beating his old rival Ruby Walsh on the 11-4 favourite Quizzical was irrelevant compared with Smullen being there to welcome them back.

The man himself said with typical graciousness that the way racing had rallied around his event was both overwhelming and humbling.

“This isn’t about me,” Smullen said. “It’s about people in this situation. We’ve raised a huge amount of money, which will give so many people the confidence to go forward.”

More than €1.3 million has been raised to help cancer research, with more to come. It included Sheikh Hamdan of the ruling Maktoum family in Dubai contributing €500,000 at a gala dinner in Dublin the night before.

The esteem in which Smullen is held was reflected in this charity effort, which reached throughout racing and beyond its confines.

Smullen’s old colleagues donated their riding fees from the Irish Champions Weekend action but Weld reflected the general experience after Search for a Song’s victory.

“I’ve had people giving me €10, €50. A man gave me €500. It reflects the response of our industry and the esteem in which Pat is held. It’s a very special occasion.

“In my mind’s eye I can see Pat riding into the winner’s enclosure on this horse, in the Moyglare colours, which he did for 20 years,” he said.

Moyglare’s owner, Eva Marie Haefner, wasn’t present but, from Switzerland, she dedicated the Leger triumph to her former jockey .

The maelstrom of emotions produced an atmosphere the staid old racecourse, even in its expensive new guise, has rarely if ever experienced before in front of an official 10,075 attendance.

In fact, the one misstep was McCoy’s, as jump racing’s most successful jump jockey took an embarrassing tumble from Quizzical when trying for a Frankie Dettori-style flying dismount.

McCoy had pledged never to ride again but agreed for a final hurrah to help Smullen. It gave him a first ever success up the Curragh.

“No disrespect to the other lads but that’s the result everyone wanted,” said Smullen. “It’s overwhelming and humbling the way everyone’s rallied around.”

Champions Weekend is designed to showcase Irish racing to the world yet in 2019 it also reflected much of the best of the sport back to itself.

That it was Chris Hayes who produced a superb Leger-winning ride even felt appropriate given he was the first jockey to pledge his riding fees to the cancer fund.

It looked an unlikely success, too, given that the filly all but tried to run away in the early stages. Ultimately, though, Hayes’s decision to let the 10-1 shot roll to the lead at halfway proved inspired.

Nothing went right for me,” said the rider, who earlier won on Weld’s Tarnawa in the Blandford Stakes. “I spoke to Pat before the race and what he said gave me the confidence to trust in her once I had her in a rhythm.”

Weld added after an eighth Leger triumph: “It was a big call [by Hayes] but he did the right thing. I know well she stays. And the world’s her oyster next year.”

However, Search for a Song has already proved a player in a pearl of a day.

Inside the world’s largest sports air dome just outside Knock 08:30
The weird and wonderful world of Memphis Depay 08:15
Matt Williams: Players’ sacrifice must outweigh the rest of society 07:00
Lebanese roots keep things in perspective for Michael Cheika 06:00
Whereabouts rule harsher on some athletes than others 06:00
Here is your handy guide to sport on television this week