Magical enjoys the limelight at Leopardstown 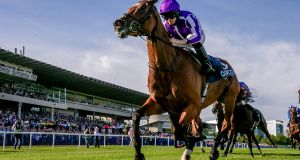 Freed from the shadow of Enable, Aidan O’Brien’s Magical took centre stage in style when leading home a 1-2-3 for her trainer in Saturday’s QIPCO Irish Champion Stakes at Leopardstown.

The Ryan Moore ridden 11-10 favourite proved over two lengths too good for Magic Wand (20-1) with the Derby winner Anthony Van Dyck (12-1) a head further back in third.

Deirdre, the first ever Japanese trained runner in Ireland, finished strongly for fourth after failing to get a clear run in the straight. If she provoked a novel international dimension the final result was resolutely local as O’Brien secured an eighth win in the €1.25 million feature of ‘Irish Champions Weekend.’

In fact, much of Saturday’s hugely lucrative programme wasn’t so much local as familial in theme. O’Brien saddled three other winners while his son Joseph also secured top-flight honours when Iridessa secured the Coolmore Matron Stakes from the Ballydoyle pair, Just Wonderful and Hermosa.

Even by the O’Brien family’s stellar standards it represented spectacular dominance which could be replicated in Sunday’s Curragh leg of ‘ICW.’ Both father and son have seven of the 10 runners between them in the featured Comer Group Irish St Leger. O’Brien Snr has 10 runners in the three other Group One contests.

On Saturday, though, he secured a singular place with Magical giving him an eighth win in Ireland’s highest rated race, one ahead of his old ally Michael Kinane who rode the winner seven times. It bridged a significant gap as there had been no home trained winner of the Champion Stakes since O’Brien’s seventh, So You Think, in 2011.

Earlier Mogul was cut to 10-1 for next year’s Derby after Japan’s full-brother landed the Group Two Champion Juvenile Stakes. The well backed Norway was too good in the Group Three mile and a half while Blissful put her nose in front of Nurse Barbara on the line of the Listed Ingabelle Stakes.

However, for once there was no denying Magical the big race spotlight. Twice previously a Group One winner, she has been cast firmly in a bridesmaid role when up against Enable, the world’s highest rated racehorse.

The Irish filly has clashed with Enable four times to date, coming closest in the Breeders Cup last season, and also finishing runner up to her in last month’s Yorkshire Oaks. The stark reality, though, is Magical has come up short every time against a rival who has a historic third Prix de l’Arc de Triomphe in her sights in three weeks time.

O’Brien is keen for another crack at Enable in Longchamp and winning with authority against colts over a mile and a quarter suggests Magical could go there better than ever. Bookmakers cut her to 6-1 for the task and O’Brien isn’t afraid to pitch his star older filly against Europe’s best back at a mile and a half.

“She had a midsummer break and her first run back was in York,” he said. “She ran Enable to a couple of lengths and we knew she was going to come forward a good bit.

“She was just ready to go to York. Obviously Enable is a great filly and when we saw her running that well against her we were looking forward to this race. We knew she was going to be in real good shape for today.

“She’s a lovely filly. We know she gets the mile and a half and handles an ease in the ground. She was back to a mile and a quarter today on fast ground and Ryan gave her a lovely uncomplicated ride.

“She had really come forward from York She came out and travelled like that and quickened the way she did. This was the second race of her autumn campaign and she’s really something to look forward to. The plan was to go to the Arc from here. It’s something great to have to think about.”

It was a second clean-sweep in the race for the trainer after Duke Of Marmalade led home another Ballydoyle 1-2-3 in 2007.

O’Brien nominated potential international campaigns for his placed runners with Anthony Van Dyck possibly being pointed at the Breeders Cup Turf after bouncing back from a lacklustre run in the King George. The colt could also stay in training next year.

The unlucky horse of the race looked to be Deirdre who was momentarily left with nowhere to go in the straight before jockey Oisin Murphy switched to the outside.

“I was very happy through the race. If I’d got a run she would have finished closer. I’m sorry we didn’t finish closer but I tried my best,” said Murphy. “She has showed how good Japanese horses are.”

Murphy briefly looked like getting compensation in the Matron on board Just Wonderful but she ultimately failed to haul in Iridessa. Wayne Lordan’s mount had three parts of a length in hand at the line and made light of dropping back to a mile from her Irish Oaks disappointment in July to win at 10-1.

“We’ve been trying different trips with her this season. The Oaks was a messy race. They went very slow so we put a line through that,” explained O’Brien, who saddled Iridessa to win the Pretty Polly Stakes over a mile and a quarter over Irish Derby weekend.

A return to that trip may be next up in Longchamp’s Prix de l’Opera for the triple-Group One winner bred by O’Brien’s parents. However, Iridessa was also cut to 5-1 by some firms for the Sun Chariot Stakes at Newmarket.

Mogul lived up to his illustrious pedigree with an authoritative win and is likely to line up next in either the Dewhurst or Doncaster’s Futurity at the end of the season.

“We won’t over race him. His brother (Japan) ran in a Group Two and didn’t run anymore but this horse looks four weeks ahead of his brother at this stage,” O’Brien said. “Obviously we think he’s a classic horse, a Guineas-Derby type horse.”

Billy Lee rode the English runner Space Traveller to success in the Group Two Boomerang Stakes but was afterwards ‘sent on’ once again to a Referrals Committee hearing over his use of the whip. Lee recently was handed a six-day ban for breaching the whip rules for a fourth time.

Andrew Slattery, one of the apprentice finds of the season, overcame a wide draw on Kastasa to win the Petingo Handicap for Dermot Weld and the Aga Khan while the Cambridgshire runner up current Option went one better in the Sovereign Path Handicap.