Elarqam could spell trouble for Magical in Champions Weekend showpiece

Curragh and Leopardstown share six Group Ones in €4.6m event 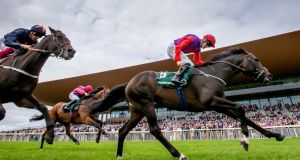 It is the first time the revamped €81 million Curragh hosts Irish Champions Weekend, and the first time anywhere in Ireland that a nine-race card has been run. Photograph: Morgan Treacy/Inpho 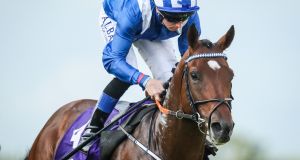 Should the Epsom runner-up, Madhmoon, pictured with Chris Hayes up, break his top-flight duck it will be hugely popular for his 87-year-old trainer Kevin Prendergast. Photograph: Oisin Keniry/Inpho

For the first time in the six-year history of Irish Champions Weekend, the Curragh looks like taking centre stage. Once again it hosts four of the six Group One events studded through Irish flat racing’s €4.6 million showpiece event of the year.

There couldn’t be a more meritorious reason for it either as at 4.50pm on Sunday iconic former champion jockeys such as AP McCoy, Ruby Walsh and Kieren Fallon, line up for the Pat Smullen Race For Cancer Trials Ireland race.

The value of prize money on offer this weekend pales into insignificance compared to the task of raising funds for such a worthy charity organised by Smullen.

The nine-times former champion jockey, who was diagnosed with pancreatic cancer 18 months ago, had to shelve plans to ride in his own race after a health setback last month required getting more chemotherapy.

“I’m delighted with the quality of the race, both in terms of the incredible champions riding, as well as a competitive field,” he said on Friday. “It’s a proper race too with all horses running off their correct marks which is what the jockeys wanted.”

Red Striker, ridden by Johnny Murtagh, could be the one to conjure the biggest cheer of the day but had Smullen been available to line up too it would have capped a HQ programme that sees Irish racing’s biggest ever capital development project get a second major examination.

The first proved disastrous as a facility opened in May, and built to cater for 30,000, attracted sustained criticism when it failed to cope with a Derby day attendance of less than 12,000.

Champions Weekend is the only other comparable test although predictions are for a smaller crowd than Derby day.

In the previous five years the Curragh leg has been the Champions Weekend poor relation in terms of focus compared to Leopardstown but that looks to have flipped this time.

Saturday’s fixture has had to be brought forward to avoid a clash with the All-Ireland football final replay which has a 6pm throw-in.

It means the €1.25 million QIPCO Irish Champion Stakes will be off over two hours earlier than originally anticipated at 4.15pm. The last of the eight races is scheduled to be off at 6pm.

By the highest standards it doesn’t look a vintage renewal of the feature event with Aidan O’Brien’s No. 1 hope Magical top-rated on 122.

O’Brien is pursuing an eighth win in the race but remarkably the last of them, So You Think in 2011, was the last horse trained by anyone in this country to win the Champion Stakes.

Having the Epsom Derby hero Anthony Van Dyck as a stable second-string at best indicates an unusual scenario in which only three of the eight runners have already won at Group One level.

Should the Epsom runner up Madhmoon break his top-flight duck it will be hugely popular for his 87-year-old trainer Kevin Prendergast.

Whether there’s confidence behind that happening might be debatable as earlier in the week Madhmoon’s owner, Sheik Hamdan, paid €75,000 to supplement Elarqam into the race.

The regally bred colt has mostly failed to live up expectations but his third to Japan at York last month was a career best. That he also ultimately looked unlucky after not getting a clear run suggests he might finally hit the Group One bullesye.

The Coolmore sponsors of Saturday’s other Group One, the Matron Stakes, have four of the seven runners although last year’s winner Laurens looks the benchmark.

Sunday’s most valuable prize is the €600,000 Comer Group Irish St Leger in which an Aidan O’Brien quartet includes the last two English Leger winners while his son Joseph’s trio of hopefuls is led by last year’s Irish Derby hero Latrobe.

Godolphin’s Melbourne Cup winner Cross Counter is one of two British-based challengers although the biggest threat to the O’Brien hegemony could come from closer to home.

It’s 30 years since the Leger went to a three-year-old filly but Dermot Weld’s York winner Search For A Song looks progressive.