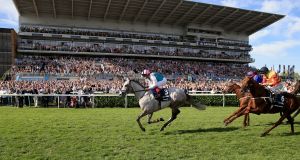 Logician maintained his unbeaten record with an emphatic victory in the St Leger at Doncaster.

Ridden by Frankie Dettori – who was winning the world’s oldest Classic for the sixth time – the John Gosden-trained son of Frankel was sent off the red-hot 5-6 favourite, following his most recent victory in the Great Voltigeur at York.

That win on the Knavesmire last month had come on the back of success in a Newbury handicap, and the Khalid Abdullah-owned colt duly took this step up to the highest level with aplomb.

Nestled towards the rear through the early stages, Dettori took his time before moving sweetly down the Town Moor straight and sweeping to the front when he asked the grey to quicken a fair way out.

Sir Dragonet briefly threatened to make a race of it. But in the end there was only one horse in it, with Dettori able to ease up close home for a two-and-a-quarter length success from Sir Ron Priestley, who ran a big race for Mark Johnston in the hands of Franny Norton.

It was another head back in third to Nayef Road, also trained by Johnston.

Recording his fifth Leger victory, Gosden said: “He took Frankie on early, you could see Frankie’s hands were higher than usual, but he eventually relaxed well.

“He stayed the trip well, which is always a worry, and the fast ground rather than it being testing probably helped him stay the trip and he’s won in a record time with one flick of the stick.

“He’s a mile-and-a-half horse really, but this is a Classic and Prince Khalid was keen because he breeds these lovely horses and wanted to win a Classic for Frankel – we’ve won him two now as we also won the Oaks for him [with Anapurna].

“The way he quickened with just one flick – he’s a gorgeous horse. I think he’d be better on good ground, rather than good to firm.

“He’ll probably revert to a mile and a half next year. He’s done so much so quickly this year that we’ll put him away now, he won’t run again this season.

“He was held back for some time and I was diligent with him, having not done a lot at two. He’s come a long way in a short period of time.”