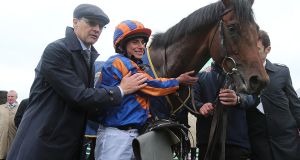 Aidan O’Brien and Ryan Moore after victory with Churchill in the Tattersalls Irish 2,000 Guineas at the Curragh. Photograph: Lorraine O’Sullivan/Inpho

Popular sentiment may never see the green flag wrapped around Irish fortunes at Royal Ascot the way they are at Cheltenham but in hard-headed business terms this most international of racing weeks could wind up once again with a distinct ‘Made In Ireland’ tag.

Inevitably the bulk of the Irish raiding party will come from Aidan O’Brien’s all-conquering Ballydoyle yard.

The man who has saddled 55 Royal Ascot winners over the last two decades – and been leading trainer seven times – has nine of the 14 Irish starters on Day One of flat racing’s most prestigious festival.

A good start on Tuesday will provoke hopes that he might break his own record of seven winners in a week which he currently shares with the late Sir Henry Cecil and there’s an element of irony in how the Irishman will saddle a headline act who carries the names of the ultimate British icon – Churchill.

O’Brien has two other hopes in the St James’s Palace Stakes and one of them, Lancaster Bomber, will score heavily too in the evocative stakes.

However, with other priceless headline acts such as Caravaggio (Thursday’s Commonwealth Cup) and Winter in Friday’s Coronation Stakes to come, this is a pivotal commercial week for O’Brien and the Coolmore partnership.

If they enjoy a bonanza then the likelihood is that last year’s record tally of ten Irish-trained winners could be threatened.

Couching it in national terms might be something of an affectation given flat racing’s global nature, and Coolmore’s international reach. But considering there are just 30 Royal Ascot races in all these are undeniably remarkable times in terms of strike-rate from this country.

In contrast to O’Brien, three of the five other Irish trainers represented on the first day are hoping to score maiden Royal Ascot victories, including Jessica Harrington who saddles Brother Bear for the Coventry Stakes.

So far 2017 indicates nothing is beyond the capacity of the remarkable woman based in Moone who in March won the Cheltenham Gold Cup with her first runner in the race and shortly afterwards landed a first Irish Grand National.

Harrington has made clear her ambition to win at Royal Ascot and could have an outstanding Albany Stakes candidate in Alpha Centauri on Friday. Brother Bear has good credentials for his two year old assignment although O’Brien’s Murillo could prove a problem.

O’Brien should have drawn a bead on Brother Bear by now and the distribution of Murillo and Declarationofpeace in the later Windsor Castle Stakes looks significant.

Ryan Moore rides both and he is long odds-on to be leading rider for the seventh time in eight years.

The taciturn Englishman had a post-war record nine wins in 2015 and given the likely strength of Ballydoyle this week there are those venturing the legendary Fred Archer’s 1878 record of a dozen winners could be threatened.

If that’s to be more than a pipedream then Moore will need a good start on his five Ballydoyle rides on Tuesday, as well as his mount for Willie Mullins in the Ascot Stakes, Thomas Hobson. However the priority will undoubtedly be Churchill.

The dual-Guineas winning colt renews rivalry with Barney Roy who finished runner-up to him at Newmarket in a race where little went right for the Godolphin-owned star.

Forecasts of a vintage head-to-head between the two best three-year-olds owned by the world’s two bloodstock superpowers feed handily in a narrative which sees betting this week on who the top owner will be.

Unfortunately for Sheikh Mohammed, rivalry only works if both sides are nearly equal. Overwhelming success over a decade for John Magnier & Co hardly suggests that’s the case and explains why Coolmore are 1-3 in the ownership market.

A fifth Group One for Churchill, and an eighth win in the race for O’Brien, can hammer the point home.