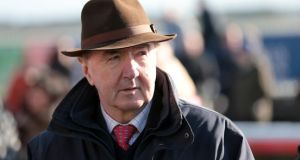 Legendary trainer Dermot Weld has described as “excessive” the amount of National Hunt fixtures run in Ireland in recent weeks in comparison to flat racing.

Ger Lyons has urged this week that flat racing gets “a fair go” in terms of fixtures after a number of weeks which saw more jumps cards being run rather than dates devoted to what is traditionally viewed as the ‘summer code.’

Lyons said: “Considering what flat racing brings to the table in terms of employment, income, the breeding sector and everything else, it’s not right what’s happening.”

The Co. Meath trainer added that the flat “doesn’t get a fair crack of the whip” and added that National Hunt racing already has the stage largely to itself in profile terms for six months of the year from October through to March.

On Wednesday Weld agreed that there has been a lack of flat racing in recent weeks.

“Over the last six weeks we have had an excess of National Hunt racing vis-a-vis the flat. There have been excessive amounts of jumps fixtures,” he said.

“A typical example was two days recently at Ballinrobe which were both National Hunt. I believe one of those could have been, and should have been, a flat programme. That’s just one example.

“You look at Fairyhouse this coming Friday and there are 90 more entries for that compared to the same programme a year ago. The reason for those 90 extra entries is a shortage of flat racing,” Weld added.

Horse Racing Ireland’s Director of Racing Jason Morris has said that this year’s calendar isn’t significantly different to 2016 and that the programme has to cater for the number of runners.

He said: “Since the end of Punchestown there have been 196 flat races and 198 jump races. So It’s about 50-50 between the codes and we’re always looking for balance between them.

“If you look at field sizes in that period the average on the flat is 10.96 per race and it’s 12.61 over jumps. That’s a significant point and one worth making. There are substantial numbers looking for National Hunt opportunities.”

Morris added that there are 168 flat races scheduled for July compared to 117 National Hunt and August will see 156 in comparison to 128.

However Weld insisted on Wednesday that there are lots of factors at play in relation to fixtures and it’s not just about the size of fields.

“You’ve got to cater for everybody, both flat and National Hunt. It’s not just about field-size. If it was you could run lots of 47-65 handicaps and get lots more runners. But that would be the end of Irish racing,” he said.

From the final three days of May up to Tuesday’s Roscommon card, there were 17 meetings in Ireland, nine of which were National Hunt. Seven were flat and one- Roscommon on Monday - was mixed.

The flat resumes at Leopardstown on Thursday evening.