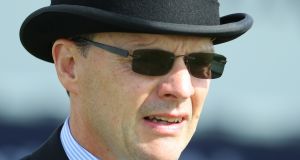 Aidan O’Brien could saddle odds-on favourites in half of Royal Ascot’s eight Group One prizes and is 28/1 to have a record number of winners at the world’s most famous flat festival next week.

The champion trainer equalled the record of the legendary Henry Cecil with seven winners at Royal Ascot 2016 and the RaceBets firm are 28/1 about the Irish man having eight or more this year.

The dual Guineas winners Churchill and Winter are overwhelming favourites for the St James’s Palace and Coronation Stakes next week while Order Of St George is also odds-on to defend his Gold Cup title after 18 were left in the marathon highlight on Friday.

Caravaggio is a general evens favourite for the Commonwealth Cup on Friday but could tighten in betting after the next forfeit stage.

In other news the Turf Club is “cautiously optimistic” the Sligo track can return to action next month. There has been no racing this year due to the course failing to recover from remedial drainage work.

However, a Turf Club team including clerk of the course Lorcan Wyer have inspected the course and reported “significant improvement” from their last visit over a month ago.

Plans are in place for a trial day involving industry professionals ahead of the intended fixture on July 16th.