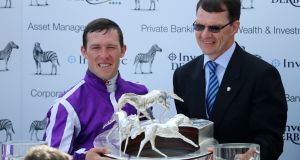 Bookmakers are already running scared of an Aidan O’Brien Group One steamroller at Royal Ascot next week with all four of the legendary trainer’s top-flight “hotpots” only 9-1 to win.

Only Order Of St George had been odds against but the defection of the French star Vazirabad on Tuesday saw him cut to odds on by many bookmakers for Day Three’s marathon highlight.

O’Brien has won the Gold Cup seven times already, including with Order Of St George a year ago.

“The hotpot Quad has seen plenty action. It was 20-1 two weeks ago and the horses have consistently shortened in recent days. And 9-1 is an enhanced price for the special,” said spokesman Joseph Burke.

The dual-Guineas winners Churchill and Winter are each overwhelming 4-6 favourites while Caravaggio is 10-11 for his sprint assignment.

On Tuesday Churchill is again set to clash with Godolphin’s Thunder Snow who chased him home in last month’s Irish 2,000 Guineas. The beleaguered Godolphin team appear to be more hopeful than confident of reversing the form with Thunder Snow.

“He tries hard in his races but Churchill beat him comfortably at the Curragh and that colt is again the one to beat,” said trainer Saeed Bin Suroor. “He is our best horse and has done very well after coming back from Ireland. But it’s a very tough race.”

The Richard Hannon-trained Barney Roy finished runner-up to Churchill in the Newmarket Guineas and will also carry the Godolphin blue on Tuesday.

Before that Cork’s feature this Sunday is the €70,000 Munster Oaks which has attracted an entry of 15 fillies including seven from Ballydoyle for the Group Three event.

They include Pocketfullofdreams who, along with Rhododendron and Roly Poly, also remains in the French Oaks at Chantilly on Sunday which is now down to 20 entries.

The sole cross-channel entry for the Munster Oaks is Signe, a Sea The Stars filly unbeaten in three starts this year for Newmarket trainer William Haggas.