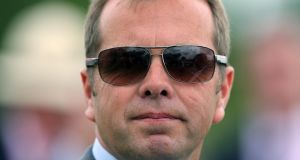 Ger Lyons: “For six months of the year the flat should get the profile it deserves and it’s not happening.” Photograph: Lorraine O’Sullivan/Inpho

Ten years after memorably breaking his Royal Ascot duck with Elletelle in the Queen Mary Stakes the in-form Ger Lyons is readying a team of up to eight horses for next week’s action at the world’s most famous flat meeting.

However it is the more local issue of Ireland’s race programme that the Co Meath trainer addressed on Tuesday, urging authorities to give flat racing in this country “a fair go” in terms of fixtures.

From the final three days of May, up to and including Tuesday evening’s Roscommon programme, there have been 17 meetings in Ireland, nine of which were National Hunt with seven on the flat and one – Monday’s Roscommon card – shared.

Lyons is adamant such a balance at this time of year is skewed against the “summer code” with too much emphasis put on jumping.

“Considering what flat racing brings to the table in terms of employment, income, the breeding sector and everything else, it’s not right what’s happening,” he said.

“I know if you cut most Irish people they’ll bleed the jumps. That’s in our DNA. But for six months of the year the flat should get the profile it deserves and it’s not happening. For what it brings to the table it doesn’t get a fair crack of the whip.

“Tracks will say it’s jump racing that gets people through the gates and it’s true the flat is an acquired taste.

“But if that’s the case then don’t have flat racing at the likes of Sligo, Tramore or Clonmel. They do a job for jumping but they’re not conducive to flat racing. I’ve always favoured concentrating the flat at tracks like Naas, Navan, Cork and Limerick anyway,” he argued.

Lyons insisted the paucity of flat dates at this time of year is a substantial concern to many flat trainers and urged colleagues to speak out on the issue.

“I know people will say I’m ranting again. But if Aidan (O’Brien) Dermot (Weld) and Jim (Bolger) don’t come out on this too then nothing is going to get done.

“We get told it’s a 12 months of the year sport but if you add it all up we race on the flat for only a solid five months. Don’t talk about Dundalk on Friday because that’s only for the bookmakers. And not every horse can operate at Dundalk anyway.

“Flat racing is about turf racing. We get about five months of the year when there’s proper ground and we seem to spend most of it jumping,” said the outspoken trainer.

“Is it right that we had to share a card with National Hunt on Monday at Roscommon when there’s a full National Hunt card the following day? I don’t believe it’s right in any shape or form. The days of shared meetings are gone anyway. Any trainer or jockey will say the same.

“I accept programming probably isn’t as easy as the likes of me sometimes make it sound. But it equally isn’t as difficult. And the flat needs to be given a fair go,” Lyons concluded.

Horse Racing Ireland’s Director of Racing, Jason Morris, insisted in response that this year’s programme isn’t significantly different to 2016 and that jump racing will have a break between June 26th and July 6th. He also said the programme has to cater to the numbers of runners.

“Since the end of Punchestown there have been 196 flat races and 198 jumps races. So it’s about 50-50 between the codes and we’re always looking for balance between them.

“If you look at field sizes in that period the average on the flat is 10.96 per race and it’s 12.61 over jumps. That’s a significant point and one worth making. There are substantial numbers looking for National Hunt opportunities,” Morris said.

“Things change in July and August. In July there are 168 scheduled flat races and 117 National Hunt. In August there are 156 on the flat and 128 over jumps.

“We are always looking at these thing. There were three days in a row at the end of May which were all jumping so if it’s needed we will obviously look at this period and see what can be done in future,” he added.

Lyons is currently fighting it out with Jim Bolger for second place in the trainer’s championship behind the all-conquering Aidan O’Brien, another step up for the trainer who has finished fourth in the table for the last three years.

The impressive Navan winner Treasuring could bid to follow in Elletelle’s hoof-prints next week by tackling the Queen Mary.

“She reminds me of Elletelle a lot in that she has the speed for five, gets six, is very hardy and doesn’t show me anything at home. They’re very similar so maybe it’s written in the stars!” Lyons said.

Provisional plans for next week also include the Irish Guineas fourth place Glastonbury Song running in the Jersey Stakes while the stalwart handicapper Sea Wolf is set to line up in the Royal Hunt Cup.

Up to five runners owned by Qatar Racing could go from Lyons’s Glenburnie Stables with Black Sails a possible for the Chesham, Savannah Storm going for the Duke Of Edinburgh, Lightening Fast in the Britannia and Gold Spinner a possible to join him or take in the Hampton Court instead.

“Gold Spinner is very ground dependant and will probably only run if there’s soft in the ground description,” said Lyons who may also run Percy in the King George handicap.