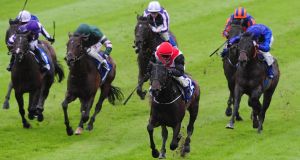 Fresh from a series of notable firsts over jumps this year Jessica Harrington has described saddling a Royal Ascot winner as her “next ambition” and plans to send a handful of horses to flat racing’s most prestigious fixture later this month.

The trainer confirmed her hugely exciting unbeaten two-year-olds Alpha Centauri (Albany Stakes) and Brother Bear (Coventry Stakes) are on target to travel and both top ante-post betting lists for their respective contests.

The giant Alpha Centauri is as low as 2-1 for the Albany after two ultra-impressive victories at Naas and despite previously warning that she might not risk the filly if the word ‘firm’ appeared in the Ascot going description, Harrington doesn’t expect ground to be an issue.

“The one thing I didn’t want for her was that real Ascot firm. But the weather looks so broken over there at the moment that it shouldn’t be a problem.

“Alpha Centauri will run in the Albany and Whitefountainfairy could run in that too or she might wait for the Chesham on the Saturday. I haven’t decided yet. But Brother Bear will go for the Coventry,” Harrington said.

Brother Bear is also unbeaten in two starts including an impressive three length victory in the Curragh’s Marble Hill Stakes over a week ago. Caravaggio landed that Listed contest on-route to winning the Coventry last year.

Brother Bear tops betting for this year’s renewal and the Kodiac colt is already a 20-1 favourite for next year’s 2,000 Guineas.

Torcedor has been a revelation in his two starts for the trainer including beating Order Of St George in April’s Vintage Crop Stakes at Navan.

The two will clash again in next week’s Gold Cup while another Harrington hopeful will be Drumfad Bay who is on course to take her chance in the Sandringham Handicap for fillies.

After landing the Cheltenham Gold Cup in March with her very first runner in the race, Sizing John, and also winning the Irish Grand National for the first time with Our Duke at Easter, Harrington’s rich vein of form has continued to the flat. She is currently fourth in Ireland’s flat trainers championship.

“A Royal Ascot winner is the next ambition,” she said on Tuesday. “I’ve had only a couple of runners there in the past but I’d like a winner.”

Such spectacular cross-code success has made headlines for the Moone, Co. Kildare based trainer around the world and earlier this week she was lauded by one of Torcedor’s part-owners in the Australian media.

“She can train a rusty bike to win a Group One race!” declared Laurie Laxon, himself a trainer based in Singapore and who has ambitions later in the year for Torcedor to take part in the Melbourne Cup. “She’s a remarkable horsewoman who’s taken the horse to another level,” he praised.

One likely opponent for Brother Bear in the Coventry is the Richard Hannon-trained De Bruyne Horse, an impressive winner of last week’s Woodcote Stakes at Epsom.

“Ryan Moore was very complimentary about him. He said he needed six furlongs and if we wanted to step him up in class the Coventry would be the plan,” said a spokesman for the Middleham Park owners. “That’s the plan and it’s full steam ahead for the Coventry.”

Ruby Walsh has his own flat ambitions in New York on Friday night when the former Royal Ascot winner Clondaw Warrior – part owned by Walsh’s wife Gillian – lines up alongside stable companion Wicklow Brave in the $400,000 Belmont Gold Cup.

Before that the champion jumps jockey travels to Wexford for two rides on Wednesday. Herminio looks capable of stepping up sufficiently on his first start for over two years to land the opening maiden hurdle although Coquin Mans could have a harder task in the three mile conditions hurdle.

Conquin Mans only just about justified long odds-on when making his Irish debut at Limerick last Christmas but ran very green on that occasion and could be worth sticking with.

Velocity Boy can be tough to peg back when he forces things from the front and could be suited by the Wexford track when he lines up in the novice chase.

1 Saracens to accept second 35-point deduction and effective relegation
2 Welcome to Iten in Kenya – home of champions and cheats
3 How do Klopp’s Liverpool measure up against greats of past?
4 Shane Lowry’s Abu Dhabi defence crumbles in the sand
5 Johann van Graan makes two changes for Munster’s last stand
Real news has value SUBSCRIBE