Derby day will be ‘ultimate challenge’ for Curragh facilities

All eyes on how track caters for 6,000 crowd amid criticism of decision to continue racing 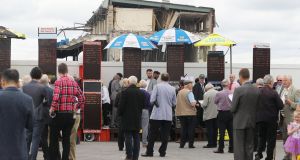 Racing continues in front of the old stand at the Curragh as it is demolished. Photograph: Lorraine O’Sullivan/Inpho

On Sunday the beleaguered Curragh had its final rehearsal before the upcoming Dubai Duty Free Irish Derby festival, which is predicted to be the “ultimate challenge” to its controversial temporary facilities.

Criticism of the decision to continue racing at the Curragh during its €70 million redevelopment has been widespread, especially after the 2,000 Guineas fixture, which was hit by wet weather.

It guarantees there will be even more focus on the derby at the start of July and how the track caters for a maximum 6,000 attendance on one of Irish racing’s showpiece events.

There was more unpredictable weather on Sunday, for a card that saw the older filly Glamorous Approach put the classic generation in their place with an all-the-way victory in the Listed TRI Silver Stakes. Trading Leather won the same race en route to derby glory in 2013.

Curragh chief executive Derek McGrath insisted vital logistical lessons have been learned in the six Curragh fixtures held up to now in 2017, and the track is ready to host Ireland’s premier €1.5 million classic.

“We have tweaked and adjusted after every day here, and I’m confident the system will respond to the derby challenge. But it’s true the derby is the ultimate challenge to the facilities in place,” he said on Sunday.

“The weather is always a tough scenario in any outdoor sport, and we can only do our best in what is an ongoing project. It’s the same in anything. I remember when Thomond Park was being developed and matches were played there, people were coming out of it drenched.

“We can provide sufficient cover for 4,000 people at any one time. But if we get a bad day on derby day, then it’s going to be bad. We saw that at the Guineas. There were almost 3,000 people inside on 2,000 Guineas day. And the following day there were 3,000 enjoying themselves outside,” McGrath added.

Derby day will be all-ticket, and fewer than 500 tickets are still on sale. The restricted 6,000 capacity includes everyone on site, and McGrath confirmed all Association of Irish Racecourses card holders will be catered for. In 2015, 25,000 people were at the Derby. That dropped to over 18,000 last year.

Criticism that holding two of Irish racing’s showpiece events – the derby and September’s second leg of “Champions Weekend” – in front of restricted audiences on what is effectively a building site appears unlikely to provoke any change for 2018.

“We review everything and we’re not going to be silly and stick with things just because a decision was made.

“But my sense is that the board here is comfortable with the decision to race, both for the Curragh and for the racing business as a whole,” McGrath said. “Our hardest challenge now is to persuade people that we’re not just thinking about the racing because we are thinking long term here.”

It is 25 years since Jim Bolger produced St Jovite to put in a record-breaking Irish Derby performance, so his capacity for long-term planning is renowned.

As well as Glamorous Approach, Bolger also scored with the juvenile newcomer Strike for Freedom, who followed in the hoof prints of Saturday’s wide-margin winning newcomer Verbal Dexterity. He was made a 33-1 shot for next year’s 2,000 Guineas.

“He could go for the Tyros, and then we could look at races like the Futurity, National Stakes and Dewhurst,” the trainer said.