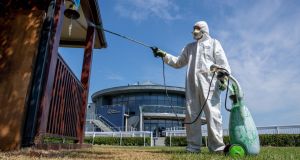 Today sees major competitive sport take place in Ireland for the first time since lockdown commenced when racing resumes behind closed doors at Naas. Irish racing has the stage to itself, or at least until the real national obsession, English Premier League football, starts again. Still, the coronavirus crisis has conspired to present racing with an opportunity it appears determined not to waste.

It’s rooted in a theory that a public starved of live sport, and subsisting on time-filler “classic” memories since the country ground to a halt on March 24th, will fall on the real thing like hungry lions on a three-legged zebra.

The last 11 weeks have taught us many things, including how sport, unlike movies, or overwrought portrayals of plucked adolescent angst, must be a live beast. Its dramatic appeal isn’t rewarded by microwaving. So Ruby Walsh isn’t short for company when arguing that this is a rare chance for racing to broaden its base and secure new fans.

Its current base is broad enough to be the envy of most other sports. Ireland’s relationship with the horse game is centuries deep. This country is synonymous with racing worldwide. It has been the most consistent purveyor of top-flight global success in Irish sport for decades. Despite which, the sector always nurses a sense of grievance about being relatively unappreciated.

Such sentiment isn’t unusual. There’s a conceit common to most sports that all they need to boost their profile is more exposure. Greater coverage will equal greater mass appreciation of what they have to offer. From bridge to tiddlywinks, all that’s preventing people realising what they’re missing out on is the media looking elsewhere.

It’s Irish racing’s happy lot then that there’s little else to look at for some time to come. Today’s resumption is a week later than Britain, and several weeks behind France. But the Government’s decision to move the resumption date forward means racing is the only live show in town.

With the GAA behemoth beached for the foreseeable future, RTÉ has moved to fill their sport-starved schedule.

On Friday and Saturday it will supply live coverage of the opening classics of a revamped flat season, the 2,000 and 1,000 Guineas at the Curragh. The national broadcaster always covers them. What’s new is how it will also broadcast one-hour magazine type shows, with live racing included, every Friday, Saturday and Sunday evening up to mid-July. By any measure it’s a terrestrial television coup.

As part of a lucrative media rights deal, Horse Racing Ireland (HRI) controversially signed away digital coverage of day to day racing to the subscription channel Racing TV. For the last year and a half Irish racing has been parked behind a paywall. But RTV, in an attempt to “maximise the sport’s shop window when sporting schedules are limited”, is rowing in with a free one-month trial offer.

With every type of media eager for distractions from sober social reality, HRI will even churn out oven-ready copy after each fixture to help out. Throw in extended cross-channel coverage of the sport – such as the weekend’s Guineas at Newmarket – and theoretically it’s a gift-wrapped advertorial bundle primed to persuade hearts and mind.

To paraphrase the former Australian prime minister, Paul Keating, it means that in the psychological battle stakes racing is stripped down and ready to go, mate.

A mainstream terrestrial TV outlet is still important for any sport. Maintaining a presence in the public consciousness is vital in profile terms alone. Finding new fans and converts is only possible if there’s a chance to check it out in the first place. It’s how many of us with no link to the horses whatsoever first caught the racing bug.

So this is a fascinating experiment in just how malleable the public is when it comes to their sporting diet: is greater appreciation really just down to greater exposure. Perhaps no one will be examining the outcome more than those in charge of minority sports who are eager to have their prejudice confirmed.

The irritating fly in the ointment, however, is how most of us still stubbornly prefer to decide for ourselves what we like and don’t like. Proselytising is great fun but being proselytised at can be a pain. Being pounded over the head about how something is good for you can easily have the opposite effect to what’s intended. Even digitally trying too hard is rarely a good look.

In reality, racing’s core appeal mightn’t be the best fit for such an experiment. Its broad public attraction is never going to challenge football or the GAA. But neither will it ever be vulnerable to fluctuating engagement levels of faddier alternatives. It is the ultimate Marmite sport, loved or flicked through as quickly as possible by TV audiences that are often ambivalent at best.

Since on-screen entertainment options are a world away from even a decade ago any sense of a guaranteed audience through just being on telly looks naive. There’s also the reality that racing will never be top of the pops with critics who dismiss it either as elitist, or hand in glove with gambling corporations, or both.

There’s no escaping either how the virus emergency has given this opportunity but also taken a reputational toll on the sport following the disastrous decision to allow the Cheltenham festival to go ahead in March. That unveiled a depth of rancour towards racing a lot more bitter than anything in Marmite.

All of this underpins a suspicion that the coming weeks might be best used less as an advertorial campaign to convert floating viewers but rather as an invaluable opportunity to reboot the sport for fans it already has, many of whom have long nursed a grievance of being taken for granted.

They’ve already made their minds up and handed their hearts to the old game. Persuading them that they’re right will be the best advertisement of all.

1 Gerry Thornley: Talk of Anglo-French hegemony is over the top
2 What next for green jersey hero Sam Bennett after toughest of Tours?
3 Tour de Covid tells us to cheer, clap and don’t ask questions
4 The Offload: Saracens prove Pro14 is not fit for purpose
5 Two medals in one day: the daunting task facing Galway’s Daithí Burke
Real news has value SUBSCRIBE

LeBron James has become this generation’s Muhammad Ali 12:36
Raiders make winning start to life in Las Vegas 11:16
Gareth Bale’s agent says he could stay at Tottenham beyond this season 11:03
Tour de Covid tells us to cheer, clap and don’t ask questions 10:07
British government pauses return of fans to sports stadiums 09:24
Here is your handy guide to sport on television this week