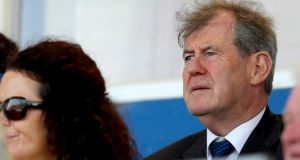 JP McManus: Wylde Hide recorded back to back Thyestes wins for him in 1995-96. Photograph: Oisin Keniry/Inpho

It’s almost quarter of a century since JP McManus last won the Goffs Thyestes Chase but bookmakers feel he has a favourite’s chance of bridging that gap on Thursday with Minella Till Dawn.

The Gordon Elliott-trained horse won his first race over fences at Cork a fortnight ago when sporting first-time blinkers.

That has helped make him a general 6-1 favourite for this week’s traditional €100,000 midwinter highlight at Gowran Park.

The McManus team are keeping their fingers crossed Minella Till Dawn makes the final maximum field of 18 runners with 39 horses currently still entered for the Thyestes.

“He needs a few to come out but the plan is to go there,” confirmed McManus’s spokesman Frank Berry on Sunday.

Minella Till Dawn has been raised a stone in official ratings for his easy Cork victory where he beat Great Khan and Debuchet.

“It looked like some of them didn’t run up to form. The horse of Mags Mullins’s [Debuchet] was having a quick run back having run in England. He usually goes a good gallop but he died quick enough that day.

“But it might have been a good performance. Maybe the blinkers woke him up,” Berry added.

Wylde Hide recorded back to back Thyestes wins for McManus in 1995-96 although it is local trainer Willie Mullins who has dominated more recently winning four times in the last eight years.

His potential runners this time include two of the topweights Acapella Bourgeois and Chef Des Obeaux. The latter was fifth to Roaring Bull in the Paddy Power Chase last time.

Pat Kelly’s star used the race to warm up for last year’s Cheltenham Gold Cup and indications are he is set to do the same now rather than take in the Irish Gold Cup at the Dublin Racing Festival.

David Mullins was a Thyestes hero in 2017 aboard Champagne West and hopes to be back in action next month.

The Grand National-winning jockey has been on the sidelines since being airlifted to hospital from Thurles in October with a fractured T12 vertebrae.

His father, Tom, reported on Sunday: “David is doing well. He has his first bit of rehab last week and the doctors are very happy. He is hoping to return to race riding in February all going well.”

He added: “Hopefully he’s at the other side of it now and it would be great if he could get a few rides in before Cheltenham. That would be the aim and hopefully Willie [Mullins] will have a few rides for him there.”