Jack Kennedy sidelined for up to 10 days with collarbone issue 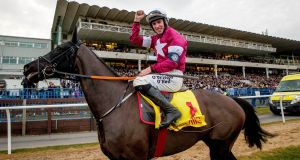 Jockey Jack Kennedy, seen here on Delta Work after winning at Leopardstown, faces up to 10 days out due to a collarbone injury. Photograph: Ryan Byrne/Inpho

Top jockey Jack Kennedy faces up to 10 days on the sidelines due to a problem with his collarbone.

Kennedy hasn’t ridden since last Sunday and misses out on this weekend’s action where his boss Gordon Elliott is heavily represented.

“Jack Kennedy is not riding this weekend and is expected to be out for approximately 10 days,” said the Irish Horseracing Regulatory Board medical officer, Dr Jennifer Pugh

“Jack has had a plate on his clavicle removed from a previous fracture as it had been giving him some trouble recently.

Kennedy broke his collarbone at Punchestown in October, an injury which kept him out for over six weeks.

It was one of a number of injuries which has disrupted the progress of the 20-year-old jockey, although he enjoyed a productive Christmas period.

His victories at Leopardstown included Grade One wins for Gigginstown Stud on both Delta Work and Apple’s Jade, as well as Paddy Power Chase success on Roaring Bull.

Among the rides Kennedy misses out this weekend are Hardline in Sunday’s Grade Two Horse & Jockey Hotel Chase.

In other news the IHRB has confirmed that watering will begin on the steeplechase track at Leopardstown next week.

The move is ahead of the prestigious Dublin Racing Festival weekend on February 1st and 2nd, an event which was heavily affected on Irish Gold Cup day last year due to quick ground conditions.

It prompted 22 non-runners on the second day, including six of the 10 declared horses for the featured Gold Cup.

Leopardstown’s decision not to water in the days leading up to the festival was heavily criticised and leading figures such as Willie Mullins and Noel Meade have already urged that watering take place if necessary to ensure safe conditions.

The going on the chase track is currently ‘yielding’ and ‘good to yielding’ in places. It is ‘soft’ on the hurdles course.

Dry conditions are forecast through next week.