HRI will push to get anti-doping mechanism across the line 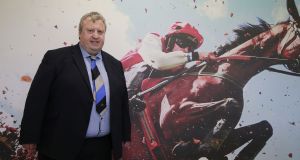 Brian Kavanagh of Horse Racing Ireland: ‘As I understand it, the IHRB are on board. The breeders are on board. We’re on board.’ Photograph: Nick Bradshaw for The Irish Times

Horse Racing Ireland (HRI) says it is ready to push for the mechanism that will allow the sport’s regulator to drug-test on unlicensed premises.

The full implementation of the Industry Wide Policy on Prohibited Substances & Doping Control – which pledged to introduce traceability of thoroughbreds throughout their lives – continues to be stalled despite being unanimously approved by the HRI board in July of 2018.

That policy came about despite protracted delays after an industry-wide anti-doping task force report was issued at the start of 2016 which recommended that Irish Horseracing Regulatory Board (IHRB) personnel be able to test on unlicensed premises such as stud farms.

A reconvened task force subsequently appeared to have resolved the jurisdictional impasse by use of a legislative Service Level Agreement (SLA) process that allows for the transfer of statutory responsibility to a separate body.

However, an SLA has still not been granted by the Department of Agriculture and the continuing failure to begin a new doping regime after a number of high-profile controversies involving anabolic steroids has seen the industry accused of dragging its feet on the issue.

On Tuesday, HRI’s chief executive, Brian Kavanagh, who has predicted that welfare will be racing’s most important issue in the coming years, said racing as a whole is ready to implement the policy.

“We are in discussions with the Irish Horseracing Regulatory Board. They are dealing with the Department of Agriculture on a Memorandum of Understanding that will allow them powers on behalf of the department. We will push that.

“There is an election called today which means we will have to engage with a new government and that will certainly be top of our agenda. Everybody is anxious to progress that.

Other major racing jurisdictions around the world, particularly in the US and Australia, have had to cope with negative coverage of some animal welfare practises in recent years, something that increases focus on traceability and drug testing in particular.

“It’s one part of an overall welfare story that is going to be a strong focus for the industry. And it’s a positive focus,” Kavanagh said.

“Now an election has been called we will engage with a new government and obviously welfare is one of the main issues,” he added.