Leopardstown not surprised at low amount of British entries for festival 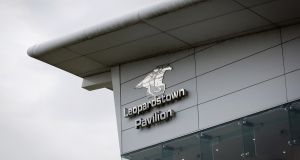 Leopardstown officials have said they’re not surprised just a handful of British-trained entries are in for the eight Grade One races for the upcoming Dublin Racing Festival.

Despite ideal dates at the start of February – just over five weeks before Cheltenham – Irish jump racing’s €1.8 million showpiece event has once again failed to entice substantial cross-channel interest for its eight top-flight contests which are worth over €1.3 million.

Only five British-trained horses remain in those races and one of them, Waiting Patiently, is reportedly unlikely to race again this season because of an injury problem.

Le Bague Au Roi is the sole British winner to date during two years of the festival and it could be left to that mare to once again lead the visiting team, this time in the €250,000 Paddy Power Irish Gold Cup on day two.

Jamie Snowden’s Thebannerkingrebel is the only other British-trained top-flight entry over both days.

“I think it is expected. What it does is highlight the strength in depth of Irish horses. You’ve got to have something pretty good to come over here and take them on,” said Leopardstown’s operations manager David Attwood on Tuesday.

“We would have perhaps hoped, but a lot of them like to stay closer to home and don’t run them so much. Some trainers prefer a lighter campaign and have their own plans,” Attwood added

“English trainers have their own plans for their Grade One horses. Obviously a lot of them ran at Kempton over Christmas and other meetings.

“But entries for the handicaps close tomorrow and will be published a couple of days later. I would expect more in the handicaps for sure.

Kavanagh said efforts will continue to try and encourage British trainers to participate, although he also stressed how the current strength of Irish horses is a factor.

“We will continue to try and drive the prizemoney for the meeting,” the HRI boss said on Tuesday. “Part of the thinking [in creating the festival] was to ensure the whole season wasn’t just about Cheltenham and to create attractive opportunities away from Cheltenham.”

The third renewal of a festival, which is the consequence of combining three previously standalone fixtures into a single weekend, will take place over February 1st-2nd.

Forecasts that the quality and strength in depth of both cards would result in full houses at Leopardstown haven’t been fulfilled to date.

An official total weekend attendance of 24,254 last year was down almost two thousand on 2018. The biggest single crowd to date was the 14,105 that went to the Saturday fixture in 2018.

Both Saturdays have been the best attended to date, although the official 11,712 tally for Irish Gold Cup day a year ago was possibly affected by the fixture needing to pass a morning inspection.

Current capacity at Leopardstown is 18,000 although that is expected to increase to 20,000 when current development work is finished in time for Irish Champions Weekend in September.

“We want to try and grow the festival each year so anything above what we had last year would be a great achievement, particularly at a time of development,” Attwood said.

Last year’s Irish Gold Cup programme was decimated with 22 non-runners, including six of the 10 declarations in the big race, due to quick ground conditions.

There have already been calls from prominent figures such as Willie Mullins, Ruby Walsh and Noel Meade for Leopardstown to ensure safe going conditions this time by watering the course if necessary.

Attwood said on Tuesday that not having ‘good’ in the ground description for the start of the festival will be the aim.

“The hurdles course is currently proper soft. The chase course is yielding although rain at the moment might make it a little softer than that.

“We’re not ruling anything in or out [in regard to watering]. If conditions change we have the ability to do what we need to do,” he said.

Other festivals such as Punchestown water if required to ideally achieve a ‘yielding’ surface for National Hunt horses.