Research points to threat of increased inbreeding in thoroughbreds 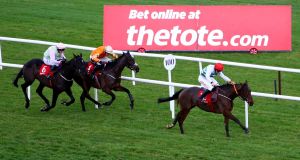 Action from Leopardstown over Christmas. Over a third of European horses had Sadlers Wells, son of legendary US stallion Northern Dancer, in their pedigree. Photograph: James Crombie/Inpho

The future of Tote Ireland, and whether all or part of it will be sold to private interests, is set to be decided by the end of March.

Officials at Horse Racing Ireland, of which the Tote is a wholly-owned subsidiary, are currently examining various options for the 90 year-old operation which has seen a dramatic dip in turnover in recent years.

In a betting landscape radically changed by online firms and exchanges, the Tote handled only €69.2 million in 2018 which was down by a third on the previous year.

A lot of that was due to an Israeli government decision to ban betting into pools but closer to home on-course turnover fell by 7.7 per cent to just €10.7 million.

The first half of 2019 saw the trend continue with turnover falling 11.7 per cent to €28.6 million. Such decreases are widely regarded as unsustainable and the board of HRI was presented with an extensive review of the beleaguered organisation before Christmas.

“The board had a full presentation on options for the Tote. They’ve asked us to go away, explore those further and report back on some of the issues before the next board meeting on February 3th.

“They gave us some steers and some preferences and some objectives. All options are being explored and we hope to come back to the board with a recommended position.

“Whether it will be at the next meeting or the one after I’m not sure. But it would be a first quarter of the year timeframe with what we feel is the best option for Irish racing,” HRI’s chief executive Brian Kavanagh said on Sunday.

He wouldn’t be drawn on details of potential buyers for all or part of the Tote and said any negotiations involved confidentiality agreements.

Technically the Tote is not HRI’s to sell. It operates on the basis of a licence issued every seven years by the government. The next renewal date for that licence is in April of next year.

However racing’s ruling body is in charge of staff and the technology and systems involved. The trend in pool betting generally appears to be towards consolidation and bigger international pools.

Three months ago the complexion of pool betting in Britain altered with the creation of the UK Tote Group in a deal which valued the operation there at over £100 million.

The cross-channel Tote entered private ownership in 2011 when it was bought from the British government by the Betfred firm. The deal which saw UK Tote Group take over was confirmed In October.

Although punters in these islands have traditionally favoured fixed odds betting with bookmakers, betting into strong pools in overseas jurisdictions is expected to grow in the years ahead.

It is understood that HRI is eager for Tote Ireland to be able to capitalise on that, something that requires the comparatively small operation to have access to capital, technology and greater access to international markets.

In other news, new research has warned about a significant rise in inbreeding in the world thoroughbred industry, a pattern that could compromise the overall population’s fertility and health.

Research by scientists at University College Dublin and the equine science company Plusvital has identified what they call a significant rise in inbreeding over the last 45 years.

The research analysed the genomes of over 10,000 thoroughbreds worldwide, including prominent stallions, and also assessed genetic diversity. The team was led by Emmeline Hill, professor in equine genomics at UCD, and chief science officer with Plusvital.

“Inbreeding has always been high in thoroughbreds but it is getting higher. It is likely that, unchecked, inbreeding in the thoroughbred will continue to increase in a market where is a high demand for particular sire lines.

“The problem with inbreeding is that it can compromise overall population fertility and health. This is a highly significant issue, akin to global warming, where inbreeding is accumulating in the population that must be addressed at an industry-wide level,” Hill said.

The research linked the increase to selection for racing traits. Ninety seven per cent of the horses in the study traced to the legendary US stallion Northern Dancer.  Over a third of European horses had Sadlers Wells, a son of Northern Dancer, in their pedigrees.