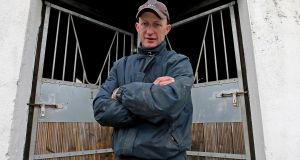 Trainer Colm Murphy: ‘I wanted the appeal to hear my side of what actually did happen.’ Photograph: Donall Farmer/Inpho

Colm Murphy, the Champion Hurdle-winning trainer and former Irish Horseracing Regulatory Board (IHRB) official, failed in an appeal against a “non-trier” penalty at his ex-employer’s HQ on Friday.

Murphy had appealed against a €2,000 fine imposed on him at Fairyhouse on New Year’s Day where his runner All About Joe was suspended from racing for 42 days.

An inquiry into the running and riding of All About Joe also found that jockey Mark McDonagh broke the “non-trier” rules. He was suspended for 10 days.

However, the man who sent out Brave Inca to win the 2006 Champion Hurdle, and saddled the 2010 Champion Chase hero Big Zeb, returned to the training ranks last year.

After Friday’s appeals hearing Murphy said he wasn’t surprised at the outcome but was satisfied he had got his version of events on the IHRB’s record after what he said was “miscommunication”.

The trainer wasn’t at Fairyhouse, where evidence was given to the stewards by both McDonagh and Murphy’s representative on the day, Patrick Sinnott.

“[But] the representative on the day is what was taken into account. But at least my record is on account now with the IHRB which I was adamant on getting done.”

The trainer said he was unhappy with McDonagh’s ride but added he understood why his appeal was unsuccessful given that the panel concentrated on the evidence of his representative on the day.

“Why would you have representatives on the day then? You’d be as well just going for the appeal.

“I wanted the appeal to hear my side of what actually did happen.

“I can understand in the stewards’ room how intimidating it is for people that would never have been there before and aren’t used to that environment, especially High Court judges sitting in front of you who are so used to the day-to-day running of it.

“Stuff can be said in there that isn’t meant to be said. They weren’t my instructions on the day and ultimately it was miscommunication,” Murphy added.