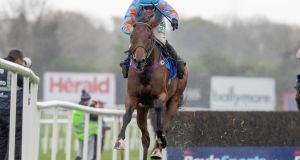 Paul Townend on his way to winning the BoyleSports Champion Steeplechase onboard Un De Sceaux at Punchestown Festival in April 2019. Photograph: Morgan Treacy/Inpho

Un De Sceaux tries to join a tiny band of elite horses that have won a Grade One race at the venerable age of 12 in Saturday’s feature at Ascot.

Willie Mullins’s remarkable veteran has won the Matchbook Clarence House Chase three times already in a stellar career that still sees him slugging it out at the top level.

For many, the weekend’s highlight will boil down to a head-to-head between Un De Sceaux and his conqueror in last month’s Tingle Creek Chase, Defi Du Seuil.

Just a neck separated the pair at Sandown, and the prospect of heavy ground conditions encourages hopes of a reversal for the Irish star whose owner happily describes him as a “nut job”.

That’s in reference to Un De Sceaux’s famed tearaway, flamboyant style of racing that time shows no sign of diluting.

A combination of that and extreme testing conditions over two miles still makes Un De Sceaux a formidable opponent even for a rival such as Defi Du Seuil, who is nearly half his age.

Having secured a 10th Grade One success at last season’s Punchestown festival – one of 13 wins in all over fences – that Tingle Creek performance was one to encourage hopes of another big day.

Should he manage it, Un De Sceaux will join Sizing Europe (2014 Champion Chase at Punchestown) and Florida Pearl (2004 Irish Gold Cup) as a Grade One winner at the age of 12.

The rarity of such senior success is stamped all over racing history. It’s over 50 years since a 12-year-old has won the Cheltenham Gold Cup. Skymas in 1977 was the last 12-year-old to land the Queen Mother Champion Chase.

Such durability is a tribute both to the horse and Mullins, whose capacity to maintain high-level careers could also be advertised further this season if the now 12-year-old novice chaser Faugheen manages to score again at the top level.

Earlier on the Ascot programme, Magic Of Light will try to repeat her 2019 success in a Grade Two Mares Hurdle.

Jessica Harrington’s versatile star later ran a superb race to be runner-up to Tiger Roll in the Grand National, and Saturday’s race is another step on the road back to Aintree.

The JP McManus-owned Darasso has been mooted as a potential Champion Hurdle “dark horse”, a claim that will be put to the test in Haydock’s Grade Two Trial.

Aidan Coleman rides the ex-French runner who missed an engagement at Leopardstown over Christmas due to ground conditions.

At home Thurles stages a pair of Grade Two prizes on Sunday, with officials “hopeful” that forecast overnight frost won’t be an issue.

Given that the Horse & Jockey Chase, better known as the Kinloch Brae, threw up back-to-back Gold Cup winners in Don Cossack (2016) and Sizing John (2017), the sole “blue riband” entry among Sunday’s five runners, Real Steel, could be an apt winner.

His stable companion Elimay looks a natural jumper and should be hard to beat in the valuable mares chase.