Katie Walsh set to take place in National despite fall 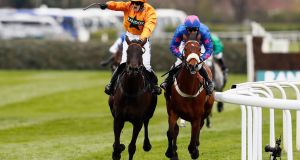 Katie Walsh could still take her place in Saturday’s Grand National field after initial fears she had broken her arm in a fall at Aintree on Thursday were ruled out.

The top Irish amateur is the sole woman set to ride in the National and is due to team up with the Paul Nichols-trained Wonderful Charm. Walsh came closer than any woman ever has to winning the National having finished third on Seabass in 2012.

She was taken to hospital after a fall at the Chair fence in the Foxhunters Chase won by Dineur amid initial reports she had broken an arm.

However, her sister and agent Jennifer Walsh said later in the evening: “It’s all good. She got a kick from a horse following her and the doctors initially thought she had broken her arm.

“Thankfully when she had the x-rays they came back 100 per cent clear. It’s just bruised. Hopefully she’ll still be able to ride on Saturday.”

Nick Scholfield had been on standby to ride Wonderful Charm but on the 40th anniversary of Charlotte Brew becoming the first woman to ride in the National, there appears to be still a chance of a historic victory for the popular Walsh.

However also on the first day of the Aintree festival, Britain’s top female National Hunt rider, Lizzie Kelly, did secure a memorable Grade One success on Tea For Two.

“This means more than Kempton. I didn’t really appreciate that at the time but this is special,” Kelly said. “Next year’s Gold Cup dream is still alive!”

In terms of headline-grabbing, it was enough to elbow even a short-odds Grade One double for Barry Geraghty and JP McManus to the side.

Buverur D’air became the eighth horse to complete the Champion Hurdle-Aintree Hurdle double and the title-holder may have Defi Du Seul to contend with next season after the Triumph Hurdle winner smoothly made it six from six over flights.

That could end up leaving Geraghty with an enviable choice but after missing Cheltenham through injury, the Irish jockey relished his return to big race success.

“He did that really well and was obviously back in his Cheltenham form,” said Geraghty after Buveur D’air’s smooth defeat of his stable companion My Tent Or Yours.

Irish-trained horses drew a blank on the first day of the National festival with Balnaslow getting closest for the visitors when runner-up in the Foxhunters.

The hat-trick-seeking On The Fringe was pulled up before the second last having struggled to recover from a mistake at the ‘Chair.’

1 Madness or defiance? The GAA is taking a huge gamble in staging Championships
2 Seán O’Brien: Anger over my parents’ break-up never left me
3 Munster earn bank holiday bonus in entertaining Thomond Park tussle
4 The Offload: Outgoing Tom Grace will be missed by IRFU
5 Plenty of positives for Farrell as Ireland hit the ground running
Real news has value SUBSCRIBE