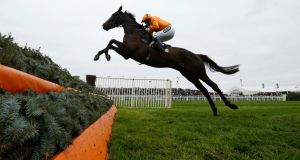 Lizzie Kelly on Tea For Two goes on to win the 50 Betway Bowl Chase at Aintree. Photograph: Andrew Boyers/Reuters

Lizzie Kelly celebrated a huge success at Aintree as Tea For Two saw off the gallant Cue Card in the Betway Bowl.

Kelly made history in December 2015 when becoming the first female rider to win a Grade One in Britain as Tea For Two, trained by her father, Nick Williams and part-owned by her mother, Jane, landed the Kauto Star Novices’ Chase at Kempton.

But this success will have arguably meant more, coming as it did against one of the best stayers of recent years in Cue Card and on the first day of the Grand National meeting.

Kelly, who had been left hugely disappointed when unseated from Tea For Two at the second fence in the Cheltenham Gold Cup, said: “That was fantastic. We were quietly confident going into the Gold Cup when our dreams were taken away from us.

“He’s a horse that has produced time and time again for me and my family, everyone else puts in more work than I do but I get the opportunity to ride him. He was a dream ride.”

Having landed the Triumph Hurdle at Prestbury Park, the Philip Hobbs-trained gelding made it seven wins from as many starts since joining the Minehead handler.

Reunited with Barry Geraghty having been partnered by Richard Johnson at Cheltenham, the 4-11 favourite was forced to get serious for a period late on before finally asserting.

Held up in mid-division early on, the JP McManus-owned four-year-old, together with Fred Winter runner-up Divin Bere, moved through to take command after the second-last.

With little to choose between the pair over the final flight it was only halfway up the run-in that the odds-on favourite obliged, pulling clear for a length and a quarter success to complete a double achieved in years gone by through the likes of Zarkandar, Detroit City and Katchit.

Geraghty said: “He’s been brilliant all season but he was very good at Cheltenham.

“He’s a horse with a future, obviously, but to come back and do what he’s done today and win again, I think that’s seven wins, he’s been busy.

“He’s very good and he can only improve with time, but it’s very hard for a juvenile to hold that level of form all season — Philip has done a brilliant job with him.”