The Grand National racing festival in Liverpool kicks off on Thursday 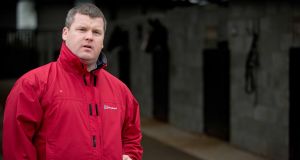 Gordon Elliot could have up to four runners at Aintree on Saturday. Photograph: Morgan Treacy/INPHO

Gordon Elliott and Willie Mullins laid the foundations of a record-breaking Cheltenham festival and the great rivals will again carry the bulk of Irish hopes into Saturday’s 170th Randox Health Grand National at Aintree.

It is a dozen years since Mullins won the world’s most famous steeplechase with Hedgehunter and he will rely on the 16-1 shot Pleasant Company after taking Alelchi Inois out of the National at Monday’s five-day stage.

In contrast, Elliott, who burst to prominence a decade ago when Silver Birch landed the National, could have up to four runners on Saturday, headed by the JP McManus-owned Cause of Causes, a 14-1 shot for National glory. Only Vieux Lion Rouge and Definitly Red are ahead of him in most ante-post lists.

Elliott’s Bless The Wings is No 42 among the 70 entries left in the race and, with a maximum field of 40 allowed, he will need two rated above him to come out. The Mullins-trained Sambremont is No 44.

Currently there are 11 Irish-trained horses among the top 40 rated entries including five from Michael O’Leary’s Gigginstown Stud, which won the race a year ago with the 33-1 outsider, Rule The World.

The Ryanair boss can also call on the Noel Meade-trained pair, Wounded Warrior and Measureofmydreams, while Gavin Cromwell’s Welsh National runner-up Raz De Maree is also guaranteed a spot in the race.

However bookmakers reckon the best Irish hopes rest with the country’s dominant trainers, each of whom saddled half a dozen winners at Cheltenham.

Elliott edged out Mullins for the Leading Trainer Award and is odds-on to also end his rival’s nine-year reign as Ireland’s champion trainer when the season ends in Ireland at Punchestown later this month.

As well as Cause of Causes, Elliott plans to run Ucello Conti and possibly the Gigginstown hope, Roi De Francs.

Cause of Causes joined an exclusive club when landing a third different Cheltenham festival event last month and he is one of four JP McManus-owned horses among the National’s current top 40.

Carlingford Lough’s defection leaves last year’s runner-up The Last Samuri as topweight but McManus’s No 1 jockey Barry Geraghty still faces a tough decision about what he will ride on Saturday.

“Barry is going to leave it a couple of days to make his decision. Aidan Coleman will ride one and possibly Jamie Codd. If the ground stays like it is, Regal Encore will probably run as well,” said McManus’s racing manager, Frank Berry.

Last year’s winning rider David Mullins is set to team up this time with Henry De Bromhead’s 66-1 outsider Stellar Notion while another notable defector from Saturday’s race is the top hunter chaser Foxrock.

Ground conditions ahead of Saturday’s big race are soft on the National course but with a largely dry forecast for the week ahead. The Liverpool festival kicks off on Thursday featuring both the Betway Bowl and the Aintree Hurdle.