Minding the star name among entries for Naas on Sunday 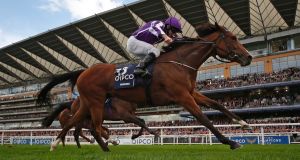 Minding is the star name among 12 entries for the Dr Vincent O’Brien Centenary Alleged Stakes at Naas on Sunday.

Aidan O’Brien’s filly won the 1000 Guineas at Newmarket, the Oaks at Epsom, the Pretty Polly Stakes at the Curragh, the Nassau Stakes at Goodwood and the Queen Elizabeth II Stakes at Ascot during a sensational three-year-old campaign in 2016.

Minding would undoubtedly be a huge draw if she makes her seasonal reappearance in the Group Three contest, although the Ballydoyle handler also has the option of running US Army Ranger and Idaho.

Dermot Weld’s Zawraq is another interesting contender for the home team, while the Ralph Beckett-trained Air Pilot and Viren’s Army from Charlie Appleby’s yard could travel from Britain.

Group Three honours are also up for grabs in the Gladness Stakes over seven furlongs. O’Brien has entered three-time Group One winner Alice Springs and Peace Envoy.

Other possible runners include Tom Hogan’s admirable veteran Gordon Lord Byron and the Michael O’Callaghan-trained Blue De Vega, who broke his maiden over the course and distance last September.