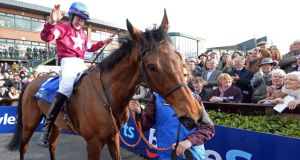 Trainer Mouse Morris feels the pressure is off as he prepares to fire a twin assault on Saturday’s Aintree Grand National in a bid to win the race for the second year in succession.

The popular trainer was reduced to tears in the winner’s enclosure last April after Rule The World, a horse who had twice broken his pelvis and arrived on Merseyside a maiden over fences after 13 starts, galloped to glory in the Aintree mud.

It had been a traumatic 12 months for the County Tipperary handler following the tragic death of his son, Christopher, the previous summer.

Rule The World’s National triumph completed a remarkable couple of weeks for Morris, with Rogue Angel having landed the Irish Grand National on Easter Monday.

Wind the clock forward a year and the trainer is set to be double-handed at Aintree, with Rogue Angel joined by another former Irish National winner in Thunder And Roses.

But with no trainer having saddled back-to-back winners since Red Rum landed the first two of his three Nationals for Ginger McCain in 1973-74, Morris is not getting carried away.

“We’re going there with no pressure as the likelihood of winning it two years in a row is probably non-existent,” he said.

“They’re two Irish National winners and I don’t think the ground will be an inconvenience to either of them.”

Tom Scudamore is excited about getting the leg-up on current 10/1 joint-favourite Vieux Lion Rouge.

The David Pipe-trained eight-year-old finished a well-beaten seventh in last year’s renewal, but gained a narrow verdict over the famous fences in the Becher Chase in December before landing the Grand National Trial at Haydock in February.

“Personally, I don’t think stamina is the issue it was last year,” Scudamore told Racing UK. “This year it’s nearly the opposite. In the Becher Chase, he came over the last in third, looking beat, and stayed every yard of that [three-and-a-quarter miles].

“Turning into the straight at Haydock there were two going better than him. By the time they got to the line, over three-and-a-half miles in very harsh conditions, he was going further away.

“He’s in very good nick. I had a sit on him. I was very pleased with him. Everyone is very happy with him.”