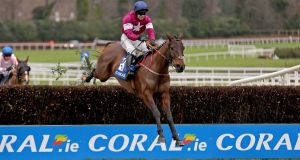 One of four Grade One races at the start of Aintree is the Anniversary Hurdle and Gordon Elliott will hope his sole Thursday runner – Empire Of Dirt – can start to successfully mark the leading trainer’s own significant Grand National date.

It’s half a century this year since Foinavon won the National and 40 years since Red Rum completed his peerless hat-trick. It’s 20 years since the world’s most famous race had to be cancelled due to a bomb scare.

And much more happily on the “7” theme, it’s a decade since Silver Birch announced in style the arrival of a major new racing figure.

If many greeted that National victory with a sense of “Gordon who?” then Elliott’s subsequently stratospheric rise to the top has left no doubt about the 39-year-old Meath trainer’s elite status.

Odds on to become Ireland’s champion for the first time later this month, he could yet have up to four runners in Saturday’s 170th Grand National with two prime hopes in Cause Of Causes and Ucello Conti. Paddy Power go with just 11-2 for Elliott winning a second National.

That all bookmakers appear to agree this is one of the most open Nationals for years only highlights how lopsided at least two of Thursday’s top-flight events look to be with a pair of heavy JP McManus-owned favourites in Buveur D’air and Defi Du Seuil.

Irish Grade One hopes will be mostly concentrated on Empire Of Dirt who takes on Cue Card in the Betway Bowl while On The Fringe’s hat-trick attempt on the Foxhunters over the big fences will being the house down if successful.

But after a record-breaking Cheltenham, Irish representation of less than a dozen runners indicates a sense that Liverpool will be something of a comparative lull before domestic fireworks begin again at Fairyhouse and Punchestown.

Elliott’s great rival Willie Mullins will be represented by Pleasant Company in the National and said on Wednesday: “Sambremont might get in as well although you need to be lucky for the fourth reserve to make it. Apart from that we will have Alelchi Inois in the Topham [Friday].”

Empire Of Dirt’s own National chance was a casualty of Michael O’Leary’s clash with the British handicapper and a sense of “what might have been” also lingers around the horse after Cheltenham.

The form of his Irish Gold Cup second to Sizing John would have put him right in the “blue riband” mix at the festival. Instead, Empire Of Dirt was dropped in trip to the Ryanair and never looked comfortable at Un De Sceaux’s pace.

He should be much happier at the Bowl distance and if that Ryanair effort hasn’t taken too much out of him, then this looks to represent a good chance of a first top-flight success.

Irish influence is most heavily represented in the Foxhunters where On the Fringe tries to bounce back from his failure to win a third Cheltenham crown. He has Pacha Du Polder to beat again but Enda Bolger’s wonderful veteran is a superb performer over the big fences.

Mags Mullins runs Martello Park in the concluding mares bumper at Aintree but a quarter of an hour later her focus will be on Limerick’s Listed finale.

Debuchet ran a superb race at Cheltenham only to be run down by Fayonagh. Anything close to that level of form again should see the hugely promising grey win.

The Turf Club has confirmed that appeals against penalties imposed under “Non-Trier” rules against the connections of Music Box at Dundalk on Friday will be heard on Thursday of next week.

The Coolmore-owned horse was banned for 42 days and trainer Aidan O’Brien was fined €2,000. Jockey Wayne Lordan was suspended for five days.