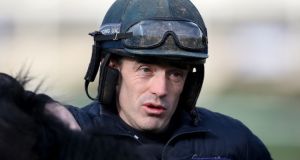 Willie Mullins continued his excellent record in the Normans Grove Chase as Ballycasey made all in the Grade Two contest at Fairyhouse.

The County Carlow handler had won five of the previous seven renewals of the race and his charge was sent straight to the front by Ruby Walsh, with only Flemenstar for company for much of the way.

Ball D’Arc was sent off 6-5 favourite in his bid for a four-timer and Gordon Elliott’s six-year-old laid down a challenge after the last, but the 15-8 winner had enough in hand to hold his younger rival by half a length.

Mullins said: “He’s found his mojo again. We were trying to make a stayer out of him but he obviously enjoys going a shorter trip and using his jumping. He’s got his confidence back.

“I wish the Topham was another fortnight or three weeks away. It was either there or here, and we chose here. Hopefully he will run in Punchestown and he will probably have to go for the Grade One (Boylesports Champion Chase).

“He was third in the Galway Plate last year, and that’s a possible target again this year. He might not be as well in this year as last year!”

Later Walsh chose the right one of the Mullins quartet as he partnered Bleu Berry to victory in the Rathbarry & Glenview Studs Novice Hurdle.

His stablemate Montalbano blazed a trail under Danny Mullins in the Grade Two contest but was challenged by Outspoken and the winner approaching the last and the trio jumped it in a line together.

The 2-1 favourite put in a better leap and stayed on strongly to record a two-and-a-quarter-length verdict over Outspoken, who was a first comeback ride for Barry Geraghty after he was forced to miss the Cheltenham Festival through injury.

Mullins said: “He’s improving with every run and he’ll probably head to Punchestown next and go novice chasing next season.

“He could go out to two and a half miles (at Punchestown), but we’ll decide closer to the time when we see what we have.”

The well-fancied Invitation Only looked set to justify 11-10 favouritism when travelling smoothly into contention but he weakened very quickly after the second-last and it was the yard’s second string that picked up the pieces.

The 10-1 chance stayed on well to take it up from Stand Up And Fight at the final hurdle and went on to pull four length clear of that rival under Paul Townend, to give his handler a hat-trick of Grade Two wins on the card.

Geraghty suffered a fall from Any Second Now but appeared none the worse as he was quickly to his feet.

Mullins said: “That was a great performance. Paul said he was very green and wanted every inch of it (two and a half miles). We will probably move him up to three miles at Punchestown.

“He’s learning all the time. Jumping is his game and he’ll go chasing next season. I was hoping he would go well, but that is better than I thought he was at this stage of his career.

“I haven’t spoken to Ruby yet but Invitation Only moved nicely into the straight and then went out like a light. There may be something wrong with him. Livelovelaugh got into a bit of trouble but then ran on nicely.”

But Geraghty then enjoyed the perfect pre-Aintree boost on his third and final ride of the day as Close Shave (9-2) got home in the Great Value Online Novice Handicap Hurdle, beating fellow JP McManus-owned runner Travertine.

Winning trainer Jessica Harrington said: “He was too keen at Navan last time and is still a bit keen. He’s a real old fashioned three-mile chaser and will not stay over hurdles for too long.

“Barry said the penny is only starting to drop now, and he won’t run on anything but soft ground.”

The win completed a double for Harrington, who had earlier triumphed with Woodland Opera (4-5 favourite) in the Hire2k Beginners Chase under Gold Cup-winning rider Robbie Power.

Harrington said: “He jumped well apart from the third-last where they got their wires crossed. Robbie didn’t want to go mad long and the horse decided to go mad long but he was very good.

“The plan is to go to Punchestown for the novice handicap over two-miles-five provided the ground is good. Otherwise we will have to put him in a few other races in case it comes up soft. It probably won’t, but you never know.

“The fact that it was heavy ground meant I decided to run him over two miles today. He moves too well for heavy ground, and wouldn’t get home on that ground over two and a half miles.”