2017 Aintree Grand National: Your guide to all 40 runners

Cause of Causes among three Elliott runners, Mullins hopes lie with Pleasant Company 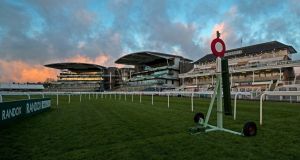 The 40 runners in Saturday’s Aintree Grand National have been confirmed. Photograph: Peter Byrne/PA

Prominent throughout last year, it was heartbreaking to see him run down close home and finish second. He also ran another excellent race in the Becher in December, but the worry is he is much higher in the weights this year.

His trainer adores this horse, but his career has been badly interrupted with setbacks. His last two runs have been more encouraging, though, and being beaten less than 10 lengths in the Gold Cup looked a nice prep for this.

Appears to have gone in under the radar. A faller in last year’s four-miler at Cheltenham when still going well, though he does have stamina to prove.

Guaranteed to stay the trip. Whether he has the class required these days, or the speed, is another matter. Would have had a better chance without a 6lb rise for winning at Exeter in February.

A confidence-boosting win at Kelso was followed by a storming run in the Gold Cup, which puts him right in the frame.

Only won one of his six runs for his new trainer, but that was on his most recent outing when the blinkers appeared to galvanise him. Doesn’t look very well handicapped.

Stamina unlikely to be an issue but he needs plenty of cut in the ground to be seen to best effect and was pulled up last time out.

Went into the Foxhunter at Cheltenham with doubts about his stamina but he stayed on strongly to be beaten a neck by stablemate Pacha Du Polder. This represents a totally different task over another mile, though.

Likely to give his supporters a run for their money before stamina becomes an issue on the second circuit.

This has been his plan since he finished fifth in the Hennessy. The worry is, as a small horse, the jumping may take too much out of him and reduce his finishing effort. Still respected.

Needs a sound surface to be seen at his best and has not run since winning in June due to a setback. A good jumper, but place claims at best.

Looked to have reached a new level when he chased home Native River at Newbury but beaten a long way at Kelso last time. It takes a leap of faith to fancy him.

Won the bet365 Gold Cup last season, so hopes are that stamina will not catch him out. Also caught the eye of many when sixth at Cheltenham. Not discounted easily.

Beaten 27 lengths when only eighth two years ago, but his excellent trainer appears to have brought him to the boil for this day ever since. Won at the last three Cheltenham Festivals — all in different races — and has proven stamina. Little not to like about his chances.

Questions to answer over his jumping and has pulled up in three of his last four races. Not the ideal type.

Meticulously prepared by a trainer who has won the National before. Not hard to see why people are getting excited, but 12 months ago he looked a non-stayer. The hope is an extra year older has added further stamina to his game.

Very impressive at Wetherby and Doncaster this season, but his jumping has been called into question in the past and that could be his Achilles heel. Still a massive player.

Ran a perfectly good race 12 months ago without ever looking like winning. A better surface might help, but hard to see him winning off the same handicap mark.

Whether he wants an extended four and a quarter miles remains to be seen. That aside, there is no doubt he has the class to be involved if he takes to the fences and stays.

A light of his former self and now rated some 20lb lower than at his peak. Trainer won it with a similar type in Mon Mome, though, so cannot be totally disregarded.

Given a brilliant ride to win the Bobbyjo Chase at Fairyhouse, which tends to be the best National trial. Lightly raced for something like this but has always looked a likely National type.

Proved his stamina when winning the Classic Chase at Warwick and also has a clean round over these fences to his name when beaten a little over three lengths in the Becher Chase. Looks sure to run a big race.

Out of form, but he was travelling ominously well before he unseated his rider 12 months ago and was only beaten a head in the 2015 Aintree Bowl. Always been an in-and-out customer, but could outrun his massive price.

Injury curtailed a promising career but could surprise many if he can return to something like the level which saw him run well for a long way in the Gold Cup last year.

Missed the cut by one last year. Collared close home in pursuit of a Becher Chase double in December and quite obviously loves the place. Rock-solid each-way contender.

Could probably do with rain as he loves the mud. Looks sure to stay but likely to meet something better handicapper or with a touch more class.

Looked a shadow of his former self since his finest hour in the 2014 Cheltenham Gold Cup. His comeback run this season might have been promising, but beaten out of sight in his last two races.

Loves it here and was second behind Many Clouds two years ago. Went well for a long way in 2016 until the rain-softened ground took its toll and needs it to stay dry.

Stamina is his strong suit, but last season’s Scottish National winner hardly arrives in great form and has never been over these fences before.

Never sighted last year but bounced back to go very close in his repeat bid for the bet365 Gold Cup. Might be a case of which side of the bed he gets out of.

Pulled up and tailed off in two runs this season and hardly smacks of a National winner-in-waiting.

A popular stayer who has taken his form to greater heights this season, despite being 12. Stamina no issue, and though he has never fallen, he needs the mud to be flying.

Placed in big handicaps on his last four starts, but hard to make a case he has been crying out for this trip. Another negative is his handicap mark, but his jumping would get plenty off the bridle.

Won the Irish National last year but it has since been a tale of woe. Looks up against it unless his trainer can produce another flash of genius that saw Rule The World win the race 12 months ago.

Failed to complete in three of his four outings to date this term and the one time he did finish he was beaten 78 lengths. Look elsewhere.

Won the Irish National two years ago but has not got his head in front since then. His last three runs, though, have suggested he is back to something like his best.

Hit hard by the handicapper for winning a nice race at Kelso and beaten a long way at Haydock. A long shot.

Certainly won’t be found wanting on the stamina front but likely to complete in his own time.

A winner at Doncaster over three miles in December, but that’s a long way from what is required. Pulled up at Cheltenham last month.

Finished with a late rattle at Cheltenham on New Year’s Day but has disappointed twice since then. Unlikely to be suited by the hurly-burly of the National.

Now a 12-year-old, but showed he was no back-number when chasing home Cause Of Causes at Cheltenham. Could sneak a place at a massive price.

Could be given a chance on his best form, but not set the world alight in two runs for new connections and is passed over.

Form has been uninspiring this season and has done all of his winning on heavy ground. Others preferred.

Looked a likely type for major staying handicaps when winning at Ayr in November, but has been well beaten the last twice and would need to bounce back in a big way to get involved.