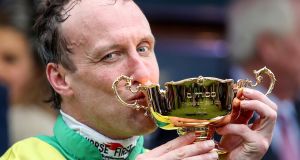 Cheltenham Gold Cup success on Sizing John has already led to more opportunity for Robbie Power and the in-demand jockey will aim to turn it into more big-race success at Aintree.

Now retained by Sizing John’s owners, Alan and Ann Potts, Power has a first major assignment under the new arrangements with two Grade One rides at Liverpool on Friday.

They include the Champion Chase runner-up Fox Norton who steps up to two -and-a-half miles for the first time in the JLT Melling Chase.

However ten years after his breakthrough Grand National victory aboard Silver Birch, Power has also been snapped up by JP McManus for Saturday’s big-race ride on Regal Encore.

The 35-year-old jockey has never ridden Regal Encore before and even though the horse is a 66-1 outsider among McManus’s triple-challenge, bookmakers are unanimous in labelling the 2017 edition as the most open National for years.

“He [Regal Encore] is an outsider and I’ll know by the time I get to Bechers first time whether he’s enjoying it and if the fences have sparked him into life,” said Power. “But he has the ability to run a big race.”

The jockey is riding the crest of a career-defining wave and a further dividend from this new link with the Potts’ is the prospect of riding the highly regarded Finian’s Oscar in Saturday’s Mersey Hurdle, part of a pre-National book of rides that also includes Supasundae in another Grade One.

A total of 11 Irish-trained horses have made the final National field of 40, including a trio from Gordon Elliott’s yard. The season’s leading trainer also has the first reserve. Bless The Wings, in case of any late defection.

Despite his high-profile spat with the British handicapper, and the subsequent withdrawal of his top-rated contenders, Ryanair boss Michael O’Leary will still have five hopefuls attempting to follow in the hoof-prints of last year’s National hero, Rule The World.

Bryan Cooper got his pick of the O’Leary team wrong in 2016 and will hope for better luck after opting to ride last year’s Irish National winner, Rogue Angel. That has opened the way for 17-year-old sensation, Jack Kennedy to have a first National ride aboard the outsider, Roi De Francs.

First of all Cooper will be anxious to get his eye in on Friday as Gigginstown’s Melling hope – and perhaps the main threat to Fox Norton – is Sub Lieutenant.

If most suspect Fox Norton will cope with a step up to two-and-a-half miles then there is solid evidence that this trip and a tight Mildmay course that puts an accent on quick accurate jumping will be perfect for his Irish-trained rival.

Sub Lieutenant closed to a length-and-a-half of the spectacular Un De Sceaux in last month’s Ryanair and even with last year’s winner, God’s Own, and Uxizandre also in the field it isn’t too hard to imagine him making a bold challenge to become another Aintree Grade One winner for Henry De Bromhead.

The Co Waterford trainer also runs Marinero in the Melling Chase but this primarily looks to concern the stable companions Might Bite and Whisper who fought out a memorable RSA finish last month.

Might Bite was notably wayward on that occasion but pulled out a victory in the last stride. Given he had veered right before at Cheltenham but behaved well elsewhere, then he should be hard to beat around a track that favours pace-forcing tactics.

Jack Kennedy warms up for his Grand National assignment on Roi De Francs with half a dozen rides at Wexford on Friday where another leading young light of the weighroom, Rachel Blackmore, can continue her quest to land this season’s conditional jockeys title.

Blackmore is one winner shy of meeting the criteria for riding in the National but can advertise her talents on Friday with Monotype and Rock On Lilly.