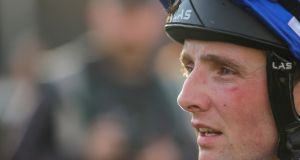 Chris Hayes again picked up a six-day ban after it was judged he had used his whip above shoulder height at Roscommon last month. Photograph: Inpho

Racing’s regulatory body has described the number of breaches of the whip rules as “unacceptable” and stood over its controversial new regulations.

Changes to the whip rules were introduced in April by the Irish Horseracing Regulatory Board which came into line with other major European jurisdictions by setting a limit on the number of times a horse can be struck.

A stewards enquiry is automatically called after a jockey uses the whip more than eight times. Any rider who breaches the whip rules four times is also “sent on” to appear before a Referrals Committee panel.

The regulations have been heavily criticised by the Irish Jockeys Association and the matter came to a head on Monday when six jockeys each received minimum six-day suspensions at a Referrals hearing.

Such is the rate of offences, which has seen over 120 jockeys breach the rules since April, that Lee’s appearance was squeezed in late, the jockey having been referred on at Tipperary on Thursday.

It was Hayes’s second time before a Referrals panel this season. He once again picked up six days after it was judged he had used his whip above shoulder height at Roscommon last month. His ban begins in just over two weeks which means he is free to ride over “Irish Champions Weekend”.

The other five riders were all found to have used the whip with excessive frequency.

Heffernan, this year’s Epsom Derby winner on Anthony Van Dyck, was penalised for a ride at Cork last month although no action was taken on another subsequent case a week later at Killarney.

The IJA has said there is a growing groundswell of discontent among its members about how the whip is being regulated.

However after Monday’s hearings, the IHRB’s chief executive Denis Egan, defended the rules. “At the outset, it is important to note that the Irish whip rules are the least stringent in Europe and the penalties applied for initial rule breaches are considerably lower than those applied in other European jurisdictions.

“The introduction of numbers into the rules brings greater clarity as to what is acceptable and contrary to what has been quoted in some publications recently, the Stewards and the Referrals Committee do retain discretion to determine whether a use of the whip is for corrective purposes or not. Discretion has not been taken away,” he said. “The number of rule breaches since the new rules were introduced is unacceptable. The reason for this is that the rules are not being complied with. The majority of riders do comply with the rules and have adjusted accordingly. I have no doubt that over time most riders will follow suit.

“I welcome the fact that there is an acknowledgement that riders will take responsibility for their actions and if this occurs the current issues will be resolved. In the meantime we will consider any submissions that are made on the rules and the penalty structure,” Egan added.

In a separate case on Monday, apprentice Nathan Crosse was banned by a Referrals panel for 14 days for dangerous riding after an incident at Cork on August 17th.