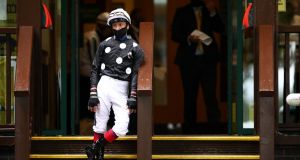 Frankie Dettori will race in France this weekend, ruling him out of action in the UK for 14 days after his return. File photograph: Getty Images

Frankie Dettori is set to miss next week’s Ebor Festival at York after opting to ride in France this weekend.

A UK government announcement late on Thursday evening revealed France was to join the UK’s quarantine list from 4am on Saturday following a spike in coronavirus cases, meaning anyone travelling back across the Channel after that time will need to quarantine for 14 days.

But Gosden has confirmed Dettori will still be in action at Deauville — meaning he will miss several high-profile rides on the Knavesmire next week, most notably Lord North in Wednesday’s Juddmonte International.

Gosden told reporters: “Frankie will be riding in France — that is the intention, absolutely.

“It will mean he will miss York. These plans have been in place for a while — for Palace Pier since the St James’s Palace and for Mishriff since the Prix du Jockey Club.

“He (Dettori) would prefer to ride this weekend. It is far from ideal to miss York, but these are strange times that we live in.”

In Dettori’s absence, Gosden hopes James Doyle will maintain his partnership with Lord North at York, having steered him to victory in the Prince of Wales’s Stakes at Royal Ascot in June. “I’m hoping James Doyle will be available,” Gosden added.