Irish Derby the pick of early fixtures when racing resumes

Curragh showpiece maintains original date but with prize money cut in half to €750,000 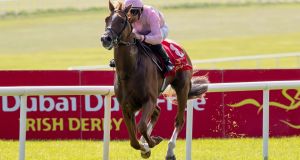 The Dubai Duty Free Irish Derby will be the first major European Derby run in Europe this year as part of Horse Racing Ireland’s revamped fixture programme for 2020.

Irish racing’s ruling body revealed on Sunday how the sport will return to action in just over three weeks time (June 8th) beginning with a meeting behind closed doors at Naas.

The first two Curragh classics of the year, the Tattersalls Irish 2,000 and 1,000 Guineas, will take place over the first weekend of racing’s resumption (June 12th-13th).

National Hunt action, previously planned not to take place until a month after any resumption, has been brought forward and will begin on June 22th at Limerick.

Tiered prize money cuts are to be made across the board but with a focus on maintaining levels at the lower and medium level as much as possible.

However Ireland’s most valuable race retains its original date and will take place at the Curragh on June 27th.

That’s just three weeks after the sport starts again on the back of being cancelled for 11 weeks due to the Covid-19 pandemic.

Provisional plans have been drawn up in Britain for the Epsom Derby to be run on July 4th while the French Derby, the Prix Du Jockey Club, is scheduled for a day later.

On Friday the government brought forward a resumption date for racing to June 8th under phase two of its roadmap to social and business recovery due to the Coronavirus emergency.

HRI has published extensive protocols for how racing will take place behind closed doors with minimum levels of industry professionals in attendance.

As part of that, racing will be restricted to nine centrally located racecourses for the first three weeks after it starts again.

That is to minimise travel distances and utilise higher stabling capacity given an anticipated rush of entries given that no racing has taken place here since March 24th.

The race tracks used for the first fortnight will be Naas, Gowran, the Curragh, Roscommon, Limerick and the four HRI operated courses at Leopardstown, Navan, Fairyhouse and Tipperary.

HRI has said that wherever possible eight race cards will be staged to maximise opportunities for the horse population. Forty-eight hour declarations will be used to assist health procedures throughout June.

However with people entering the country required to self-isolate for 14 days under government health guidelines the possibility of the first three Irish classics of 2020 being “domestic only” affairs cannot be discounted.

HRI’s revised fixture list for the first three weeks after resuming also saw confirmation that there will be no apprentice or claiming races for the first fortnight. 10lb claiming jockeys with less than six rides will not be allowed compete in that timeframe either.

With no racecourse saunas permitted under the Covid-19 protocols there will continue to be a 2lb increase in jockey weights in all races.

HRI’s chief executive Brian Kavanagh thanked the industry for their patience during a difficult time.

“Regrettably, due to the financial circumstances of the industry, prize money cuts are inevitable and we have adopted a tiered approach, endeavouring to protect the grassroots of the industry as much as possible.

“We expect there to be significant demand for horses to run once we resume, and we will aim to provide opportunities across the spectrum of age, gender and ability,” he said.

“We will have missed 11 weeks’ racing which will take some time to catch up. We intend to do this over the course of the rest of the year rather than immediately.

“The resumption of racing will allow sales, trade and other ancillary services to get going again and will be widely welcomed in those areas.

“Horse Racing Ireland are liaising closely with our international counterparts regarding the resumption of racing in those countries and issues such as protocols, international runners and prize money levels,” Kavanagh added.