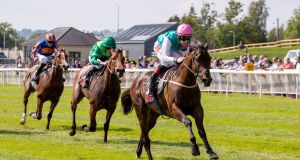 Siskin could stay at home for the Irish Guineas rather than travelling to Newmarket. Photo: Morgan Treacy/Inpho

“Postpone Royal Ascot for at least a week” was the plea from a leading Irish trainer on Saturday, following the news that the sport in Ireland will resume on June 8th. British officials have insisted on leaving the meeting in its long-established slot, beginning on June 16th, which may mean very few or perhaps even no Irish runners in prestigious two-year-old races such as the Coventry Stakes.

“If you put the pressure on us by keeping Ascot on June 16th, you’re basically ruling us out,” Ger Lyons said in reference to the juvenile races. “If you want proper Ascot ... you’ll have to tell me, is Ascot really Ascot without the internationals?

“By us jumping off on the 8th, we’re not going to get enough horses qualified for your two-year-old races. To be fair to everybody, Ascot have to seriously consider moving everything back a week, just to give everybody a chance to catch up. Once you’re through the first three or four weeks, we’ll all find our legs.”

British racing hopes to resume a week earlier than Ireland, on June 1st, and there will be 28 races for two-year-olds in the first eight days, specifically so that trainers can get a run into horses being aimed at Royal Ascot. Ascot’s juvenile races are sure to be over-subscribed and priority will be given to any horse that has finished in the first four of a race, meaning that unraced horses, from Ireland or elsewhere, will need luck to get into the lineup.

That will be preying on the mind of Aidan O’Brien, whose nine wins in the Coventry is a trainers’ record. If he is to follow up last year’s success with Arizona, he may need to find a two-year-old who can run to a high standard in consecutive weeks.

Lyons pointed to another obstacle facing Irish trainers who want to race in Britain, that any jockeys or staff they send over will have to self-isolate for a fortnight on returning to Ireland. For that reason, Lyons may skip the 2,000 Guineas with his classy Siskin and run instead in the Irish equivalent, which he hopes will be on June 8th or soon after.

Judging by Lyons’ enthusiasm, Siskin could take high rank among three-year-old milers this summer. “I couldn’t be happier with him,” the trainer said. “I was worried about him staying a mile in the middle of spring but he’s turned a corner and I’m not worried now. I wish the Guineas was tomorrow.”

If Siskin runs in the Irish Guineas while O’Brien’s Arizona comes to Newmarket, that will suit Lyons perfectly in view of a rumour about how well that rival is working at Ballydoyle. “I heard they sent up a drone to film him going up the gallops, and the drone couldn’t keep up. My feeling is, they should sack the drone operator ...”

Ascot’s Nick Smith said the Royal meeting would stay in its established slot, to avoid conflicting with race meetings scheduled for other tracks later in the summer. “The problem with [a delay] is you really start to clog up the Pattern schedule,” he told Sky Sports Racing. “You’d basically be asking Newmarket to cancel the July meeting. And who knows how far it would have to go back? Then you start to put Glorious Goodwood at risk. It’s just not the way the Pattern operates.

“This is not going to be an ideal scenario. I’m not going to say that anybody’s going to have the ideal preparation. But we all feel that we have a duty to get this show on the road and get it done. We could get broadly back to a regular Pattern within five or six weeks and if we were able to do that ... Because we don’t really want to push the whole Pattern back and end up with British Champions Day on the all-weather in November.”

Horse Racing Ireland is expected to do everything it can to provide prep-race opportunities from June 8th for Irish horses that might have Ascot as their aim. Smith added that he and his colleagues would refine the running order of races at the Royal meeting to help trainers as much as possible. Though he did not suggest specifics, that could mean having the best two-year-old races towards the end of the week. – Guardian