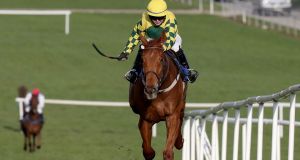 Advance health tests and temperature screening on arrival at racecourses are among the strict protocols that will be in place when racing resumes behind closed doors in Ireland on Monday, June 8th.

On Friday the Government moved forward the resumption of racing to the second stage of its five-phase plan for the reopening of society and business due to the Covid-19 pandemic.

Racing had been included in phase three of the strategy in relation to sports taking place behind closed doors.

That would have meant a delay until June 29th , in contrast to France which resumed racing on Monday and Britain which is planning to start back on June 1st.

Lobbying by Horse Racing Ireland through the Department of Agriculture has resulted in a change of policy and it means the first return of major sporting action in this country in just over three weeks’ time.

Ten fixtures took place behind closed doors up to an including March 24th when racing stopped as part of lockdown measures due to the Coronavirus emergency.

Those meetings were widely seen as successfully carried out but additional protocols will be introduced in June.

They include only key personnel being permitted to attend race meetings while there will be mandatory wearing of face coverings for many attendees including jockeys and stalls handlers.

Everyone at the fixtures will be subject to health screening in advance and thermal temperature screening on arrival. Anyone presenting with an elevated temperature will be denied access.

HRI said there will also be a “dedicated Covid-19 protocol officer” at each fixture to enforce social distancing.

The semi-state body’s chief executive Brian Kavanagh said on Friday evening that advance health screening will consist of a questionnaire to be filled out 24 hours in advance for approval by the Irish Horseracing Regulatory Board medical officer.

He also said that a protocol officer will either be a HRI or IHRB staff member and they will have the authority to eject anyone flouting social distancing rules.

“You would hope and expect it wouldn’t come to that. We found first time around that people took to it well. They’re used to being regulated. And they’re used to bio-security in racing,” said Kavanagh who added that race meetings will be very different from what people have experienced before.

“These will not be race meetings as you might traditionally imagine them, rather stripped back events which will determine the best horses in various categories, a vital factor for the breeding industry.

“Attendance will be kept to an absolute minimum and Covid-19 protocols will be strictly enforced,” he said.

HRI had previously hoped a resumption would be possible on Monday under phase one of the ‘Roadmap for Reopening Society & Business’.

However it had also drawn up over various programming scenarios for different dates on which it might start again.

Originally that included a plan to begin with a month of Flat racing before any National Hunt action might resume. However unease in jumping circles at the prospect of not being back in action until July might alter that.

It will be one of the matters addressed at a HRI board meeting on Saturday.

“The question of jump racing will be part of that, bearing in mid there is a major backlog in Flat racing. You also have to keep in mind there is a group of summer jump horses that have to serviced as well, particularly in advance of Galway,” Kavanagh said.

“That decision was a time when hospitals and ICU units were expected to be overrun. Thankfully because of the way the pandemic has been handled that surge hasn’t come. So that concern about jockeys falling over jumps is less of an issue.

“The objective when we resume will be to provide opportunities for horses across all ranges of age, gender and ability.

“There’s clearly a big demand. France got over 1,000 entries for its first three meetings on their first day back. We sense there is a similar build-up here in Ireland.

“On Sunday we will release a revised fixture list up to the end of June, including confirmation on when the Classics, traditionally scheduled for this time of year, will be run,” Kavanagh said.

The full HRI document on return to racing protocols can be read here.