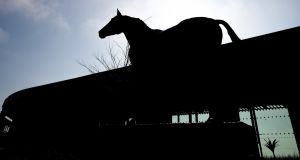 The impact of Irish racing not resuming behind closed doors until June 29th has been described as “catastrophic” by some within the sport.

Confusion has reigned throughout the weekend as to where racing figures in the Government’s five-phase plan for a relaxation of social restrictions due to the Covid-19 pandemic.

On Friday, Taoiseach Leo Varadkar revealed how a phased reopening of different sectors in the economy, starting on May 18th and extending until August, will take place.

Later this month some outdoor activities, including sports such as tennis and golf, will see some easing of restrictions that allow them resume in some form.

However a section in phase three indicates no sport behind closed doors will be allowed until June 29th at the earliest.

But since racing is under the administrative wing of the Department of Agriculture, Food & Marine, Horse Racing Ireland immediately said it was looking for clarity on the situation.

For an industry employing almost 15,000 people and worth up to €2 billion to the economy, a Government green light to resume is seen as vital.

Yet almost two days after the Taoiseach’s speech no official line on the matter has come from racing’s semi-state ruling body, HRI.

Officials there did not comment on Sunday and there seems to be a widespread belief within racing circles that HRI was caught unawares by Friday’s outline plan.

There were 10 fixtures held behind closed doors prior to sport being shut down on March 24th due to Coronavirus. They were widely seen to be successfully carried out.

Delaying a resumption of the sport in similar circumstances until late June would be in glaring contrast to other major jurisdictions including France, which is set to start again on Monday week (May 11th).

There are also growing hopes in British racing that the sport there will resume later this month.

One prominent trainer said on Sunday that a scenario where Ireland returned to racing weeks after its main European competitors would be catastrophic for the industry here.

There appears to be growing disquiet about a lack of information from HRI on the matter, a situation possibly not helped by this being a Bank Holiday weekend.

On Sunday several industry professionals didn’t want to go public on criticism of HRI when contacted.

However there was near unanimity on how both clarification is urgently required and that any delay until June 29th will be disastrous.

“It can’t be June 29. If it is we are going to be left behind,” said Co Tipperary-based trainer Richard O’Brien. Co Meath-based Ger Lyons added: “The impact of that would be huge, very negative. You’re basically talking about July.”

Lyons said he was left “deflated” by the Taoiseach’s speech on Friday and is working on the basis that racing has been included in Phase Three of the plans.

“Why put us in Phase Three if we’re in Phase One? Did someone make a mistake? As far as I’m concerned, on Friday he said we’re in Phase Three and until I’m told different, we aren’t racing until the end of June. It’s as simple as that,” said Lyons who is among the country’s top Flat trainers.

Lyons said everything he had heard before Friday was that racing here would resume this month, possibly as early as Monday. That he said would have provided Irish racing with a perfect ‘shop-window’ with high-quality Flat racing every day for a month as all other sports stay in lockdown.

“In fairness to Brian Kavanagh [HRI chief executive] I think he was as deflated on Friday as we were. He was adamant May 18 was the date and when yer man [Varadkar] made his Phase Three speech Brian was caught as unawares as the rest of us. I stand corrected on that but that’s how I’m reading the situation,” he said.

Lyons commented that racing may have lost out politically by not having a stronger voice fighting its case in Government and that the National Public Health Emergency Team are calling the shots now rather than the cabinet.

“We could do this. We could race behind closed doors now. I think we could make entries on Tuesday, race at the weekend, and safely make a success of it.

“We are galloping horses here every day. It’s the same in Ballydoyle, in Joseph’s [O’Brien] and in Willie’s [Mullins]. We can do the same in Naas, the Curragh, Leopardstown, Gowran and Navan and not affect the general public. It would bring something positive to the table,” he said.

Richard O’Brien said it is vital that clarity is brought to the situation as soon as possible.

“The problem is when you leave a vacuum like this it gets filled with rubbish. I have it on ‘authority’ that this is happening, that’s happening, this is certain, that’s certain, everyone claiming to be the last word on it but the reality is it all adds up to a situation where no one has a clue.

“I don’t understand how they’ve allowed all this speculation to develop. I’m not suggesting this is anyone’s fault. It appears as if they [HRI] were caught on the hop on Friday.

“I can’t see any reason why people can’t come out and just say ‘look, we don’t know, as of now there’s nothing definitive, we don’t know the answers, and we will endeavour to have more come Tuesday or Wednesday’. It just stops everything,” O’Brien said.

“But it has been felt, we have been led to believe, that we’re on a trajectory that will allow us to do something come late May. It’s not that anyone is interested in risking the wellbeing of anybody,” he added.

O’Brien also pointed to the agriculture sector and how marts are operating.

“I know it’s a reduced form at marts but they’re there trading and cattle are moving. We need to get moving,” he said.

Mike Tyson’s return postponed until November 28th 10:41
Atalanta hope to bring joy to Bergamo after city’s darkest hour 09:35
Madigan has Ireland caps in sight; view from Melbourne’s second lockdown 07:06
View from Melbourne: Sporting fabric of the city suffering from second lockdown 06:30
Madigan’s primary goal is Ireland caps after switch to Ulster 06:00
Here is your handy guide to sport on television this week