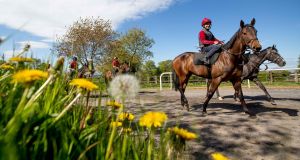 Horse Racing Ireland has said any resumption date for the sport behind closed doors is a matter for Government and rejected criticism of its media silence for much of the last week in relation to such a date.

On Thursday evening the Government finally clarified that racing is included in its plans for sports behind closed doors being allowed to begin again only on June 29th at the earliest.

That is among the details in the third phase of its five-phase ‘Roadmap for Reopening Society & Business’ which was revealed by Taoiseach Leo Varadkar last week due to the Covid-19 pandemic.

His announcement was a blow to racing’s hopes of being included in the first phase, which is due to see restrictions ease in some outdoor non-contact sporting pursuits such as golf and tennis on Monday week.

Racing’s argument that it ran 10 fixtures prior to lockdown on March 24th, and that French racing is due to begin again this Monday, had kept some hopes alive this week that it might yet be included in phase one.

However Friday’s announcement by the Department of Agriculture, the government wing with responsibility for racing, appeared to quash those lingering ambitions, although HRI has said it will continue to negotiate with Government about an earlier resumption date than June 29th.

A phase two return on June 8th has been mooted as a possible compromise. However HRI’s chief executive Brian Kavanagh said on Friday it would be wrong for him to speculate on any potential resumption date, including the possibility still of May 18th.

“In this one HRI is not the decision maker. We remain ‘racing ready’. We’ve made those points but it’s a bigger picture thing,” he said.

“I won’t speculate on it. A lot depends on a lot of variables, the general situation with the disease, the protocols that we have, all those situations.

“Essentially this is an issue that the industry must take its lead from Government and from the medical advice that government receives. That is the sensible and prudent way to approach it,” he added.

The Irish Government position on a resumption of racing is in glaring contrast to France which is due to stage three fixtures on Monday, including at the main Paris course in Longchamp.

There are also provisional plans in place for racing to resume in Britain at some point later this month. Germany started racing again on Thursday.

A June 29th resumption, weeks after Irish racing’s main competitors, has been described as having a potentially catastrophic impact on the thoroughbred sector here.

Some industry professionals have privately speculated on whether widespread public criticism about the Cheltenham festival going ahead in March despite the Coronavirus emergency may have had a political impact here, although Kavanagh rejected such suggestions.

“No, I think is an entirely medical issue and the Government have approached this completely all the way through on the basis of medical advice.

“There is a huge team advising the Government from a medical point of view. They have taken the advice all the way along.

“Any resumption of racing is an important issue in our world but in the overall scheme it’s a smaller issue. And so it is entirely, in my view, a safety and medical matter,” he said.

Irish racing’s top official also defended his organisation’s media silence from last Friday until Thursday evening when it eventually issued a statement outlining its plans to continue negotiations with the Government.

Almost a week of no official comment was described as “bizarre” in some quarters and fears were expressed about all kinds of speculation filling the information vacuum.

“We were all along working, and continue to work, to try and resolve this issue and looking for clarity. That clarity came formally yesterday when confirmation came through about the 29th. Up to that there was no point speculating.

“The main thing to focus on is that the country is in the middle of a major pandemic and the Government are dealing with that issue and we’re trying to get racing back at the right time. That’s where our focus has been entirely.

“People generally know what is going on. We sought clarity immediately after the document was published and that’s a fact.

“You have to keep the thing in context and there is a broad pandemic being dealt with. That’s the primary issue in the country. From racing’s point of view it’s when is it safe to come back and appropriate to come back.

“And so we’ve said we believe we have a basis to do that and we will engage on that issue. To have endless speculation beyond that is not right really.

“If you read our statements and comments all the way along it was that this was a medical issue and we will be guided by the medical authorities and the by the Government.

“We made submissions that racing is ‘racing ready’ and we are ready to start as soon as possible after the restrictions are eased.

“We never set a date as other countries did – deliberately – because it wasn’t our date to set.

Asked why Government has so far not accepted HRI’s arguments for an earlier resumption of racing than June 29th, Kavanagh replied: “I don’t know. I think that’s not a question for me to answer.”