Quality Longchamp card gets racing back underway in France 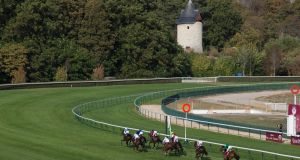 Longchamp will be the pick of the racing on Monday as the sport gets back underway in France. Photo: Lo Chun Kit /Getty Images

Racing resumes behind closed doors in France on Monday with the sport in Ireland set to look on enviously.

The former Seanad election candidate and chairman of Naas racecourse, Dermot Cantillon, summed up much of the mood on Sunday when tweeting - “French racing getting the green light from President Macron...meanwhile in Ireland ‘the home of the horse’ we can only dream.”

The three fixtures at Longchamp, Toulouse and Compeigne only got that presidential green light after 11th hour weekend negotiations reportedly on the back of objections from an envious football sector in France.

However in the midst of such Covid-19 abnormality the prospect of one of European racing’s “big three” jurisdictions getting back to some kind of sporting normality will be reassuring to many.

The ten race card at Longchamp in particular is likely to receive unprecedented attention from punters starved of action since racing in Ireland closed down on March 24th.

The first race on the card, the Group Three Prix de Saint-Georges, has a morning off time of 9.55am.

The French restart, on the back of the sport having resumed in Germany on Thursday, is in stark contrast to government plans for racing not to begin again in Ireland until June 29th at the earliest.

Such a delay has been predicted to have a major impact on the thoroughbred industry if Horse Racing Ireland cannot successfully lobby for an earlier resumption, possibly on the June 8th deadline for Phase Two of the government’s ‘Roadmap for Reopening Society & Business.’

One positive note for the sport from government is that HRI’s 2020 budget allocation of €67.2 million looks like being left alone.

Asked about this year’s state funding, the Minister for Agriculture, Food & Marine, Michael Creed, told the Irish Field: “I don’t, at this stage, envisage any difficulty with what has been committed.”

As for 2021, and the likelihood of swinging economic cuts on the back of the Coronavirus emergency, Creed was non-committal and said it would be a matter for any new government.

“Across government there is recognition of the global standing that we have in the racing industry and not working to put that in jeopardy while at the same time being acutely aware that we’re dealing with, first and foremost, a public health emergency and trying to secure the best interests of the industry in that context,” he added.

Monday’s action at Longchamp also includes a pair of trial races for the rescheduled French Guineas which will take place on June 1st. They may yet see international horses allowed to travel to France but the rest of this month’s action is strictly “domestic only”.

The colts trial, the Prix de Fontainebleau, has Godolphin’s unbeaten Group One winner Victor Ludorum, among the eight starters.

1 Solskjær praises Martial for building himself into ‘powerhouse’ centre forward
2 No final round heroics for Rory McIlroy at US PGA
3 Andy Sullivan fights back tears as he wins English Championship
4 Harding Park, named after a lousy US president who never stepped foot on it
5 Liverpool to sign Olympiakos left back Kostas Tsimikas
Real news has value SUBSCRIBE