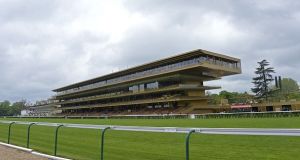 As racing resumed in France on Monday Batwan was the first winner, claiming the Prix de Saint-Georges at ParisLongchamp. File photograph: Getty Images

The sport had been on hold since March and despite a last-minute threat to the action on Friday, the authorities gave the go-ahead for France Galop to restart racing behind closed doors.

Strict social distancing and hygiene measures are in place on track, with all jockeys wearing masks to race along with the limited personnel on track.

Racing was kicking off 24 hours after what should have been French Guineas weekend, but Olivier Delloye, chief executive of France Galop, was delighted to see the sport resume.

He tweeted: “Certainly we run behind closed doors. Certainly we are competing in Fontainebleau the day after the Poules... But what satisfaction to see this first race finally arriving. Thank you to the great teams of France Galop for their incredible work and thank you to all of you for supporting us.”

As for the race itself, Sestilio Jet was bidding to defend his title in the Group Three heat, but he was under pressure some way out as Batwan, who finished second last year, was settled in third through the early stages.

Maxime Guyon’s mount hit the front inside the final furlong, edging in front at the line to win on his first outing in an exactly a year.

FAI chairman Roy Barrett predicts sense will prevail at EGM 23:00
Georgie Kelly on the double as St Pat’s move up to fourth 23:09
Lyon make Juventus wait another year despite Ronaldo double 22:41
Real Madrid crash out to relentless Manchester City performance 22:26
Li Haotong thrusts himself into the mix at US PGA 21:56
Here is your handy guide to sport on television this week