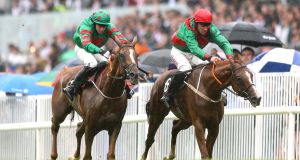 Dylan Robinson on board Ornua comes in second behind Davy Russell on board Rashaan in the Open Gate Brewery Novice Steeplechase at the Galway Racing Festival in August 2018. Photograph: James Crombie/Inpho

Jockey Dylan Robinson returns to action at Fairyhouse on Saturday following a year on the sidelines after testing positive for cocaine.

Last March Robinson was suspended for three years due to testing positive for the drug at Galway the previous October.

The ban was backdated to the start of 2019, but Robinson has availed of a partial suspension of that penalty through “positive engagement with medical and associated matters” which allows him to resume in the new year.

The 24-year-old from Waterford was one of last season’s leading conditional riders and had partnered 13 winners, principally for trainer Henry De Bromhead.

They included his biggest win to date on Ornua in a Grade Three at Roscommon. Robinson will make his comeback on the same horse in Saturday’s €100,000 feature at Fairyhouse.

“I can’t wait and I’m looking forward to it,” he said on Friday. “It has been a long year but I’ve been in Australia for six months, which was a good experience, and it’s great to be back.”

Ornua carries topweight in the Dan & Joan Moore Handicap Chase which Gordon Elliott hopes to win for a fourth year in a row.

The trainer’s last winners, Duca De Thaix and Doctor Phoenix, are back for another crack at the valuable contest, although Avenir D’Une Vie could be more interesting.

The ex-Gigginstown horse was a cheap buy and made an immediate return on the investment when winning over course and distance at the end of November.

He is 8lb higher in the ratings for that, but may still be ahead of the handicapper.

Elliott has enough ammunition to potentially enjoy a lucrative Saturday and his Chosen Mate looks one to note in a Beginners Chase.

The high-class hurdler ran an encouraging debut over fences behind Melon over Christmas and might have too much for the Willie Mullins pair Voix Des Tiep and Annamix.

JP McManus’s expensive purchase Andy Dufresne lost his unbeaten record at Navan prior to Christmas, but returns to action over two miles in the Sky Bet Moscow Flyer Novice Hurdle. Connections appear convinced that wasn’t Andy Dufresne’s true form, and the form of his maiden win prior to that has been boosted.

O’Connor’s sole previous ride on the horse was when beaten at last Spring’s festival in Punchestown. Carefully Selected looks a big threat if his jumping improves from a winning debut over fences.