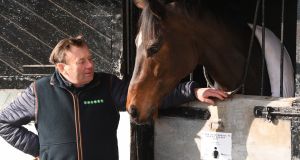 Trainer Nicky Henderson dealt with the scratching of star chaser Altior (above) through his Unibet blog. Photograph: Mike Hewitt/Getty Images

The body representing Ireland’s racehorse trainers insists there should be nothing in racing that might undermine public confidence in the sport.

The Irish Racehorse Trainers’ Association has confirmed it is awaiting proposals from the Irish Horseracing Regulatory Board (IHRB) about potential greater regulation of sponsorship deals between license holders and bookmakers in future.

On the back of this week’s controversy over how top British trainer Nicky Henderson dealt with the scratching of Altior through a bookmaker’s blog, the IHRB has revealed its concerns over the perception of sponsorship links between bookmakers and trainers and jockeys.

On Friday an IHRB spokesman outlined how it “doesn’t sit comfortably with us”. However he declined to comment further until the regulatory body has met with trainers representatives. It has already spoken with the Irish Jockeys’ Association about the matter.

Some of Irish racing’s biggest names are commercially tied to gambling firms.

Gordon Elliott and Joseph O’Brien are “ambassadors” for Betfair. Jessica Harrington, like Henderson, does a blog for Unibet. Robbie Power is associated with Boylesports. Ruby Walsh still works with Paddy Power to which he was linked for many years through his riding career.

Such deals have been regularly criticised as an own-goal for racing in terms of punter confidence. Concern has also been expressed about any perception that bookmakers might benefit from market sensitive information being released through their platforms.

The matter has come to a head on the back of the Altior saga with leading cross-channel trainer Ralph Beckett suggesting no trainer or jockey should be sponsored by a bookmaker because it compromises the sport’s integrity.

Similar views have been privately expressed by some trainers in Ireland although the IRTA’s chief executive Michael Grassick said on Friday: “The best thing is to see what the regulator would like to do when they come to us.”

However Grassick added: “There should be nothing in racing that would make the public wary of the industry. Everything has to be up front. We have to be careful and make sure everybody has full confidence in what goes on in racing is correct.”

The Irish Jockeys’ Association spokesman Andrew Coonan confirmed the issue was raised in a meeting with the IHRB before Christmas where the potential impact of new gambling legislation was also discussed.

“Robbie Power for example has an association with Boylesports. But that’s only ambassadorial work. It’s not sponsorship,” he said.

Coonan pointed to formal deals having to be lodged with the IHRB where rules in relation to logos, and where they can be worn, form part of a sponsorship agreement. Anything outside of that doesn’t constitute sponsorship.

“The rules in relation to jockeys preclude you from being sponsored by a bookmaker,” he insisted.

Asked how he would characterise blogs and other advertising on bookmaker platforms, Coonan replied: “They’re doing some ambassadorial work for them. It’s not sponsorship.”

“It’s very closely monitored and any betting irregularities are picked up by bookmakers to the regulatory authority and they’re investigated.”

As for any potential change on the back of new gambling legislation Coonan said: “We will have to see where any new legislation takes us and if it forces any changes.

“If it has something which we specifically cannot do we will have to see if there’s any potential for infringement there and avoid that.

But at the moment anything that’s being done in terms of jockeys is perfectly legitimate, within the rules and approved by IHRB.”