Altior on course to defend his Clarence House crown 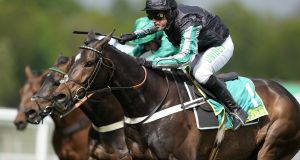 Nick Henderson’s Altior has not been seen in competitive action since suffering his first defeat in 20 starts over obstacles when runner-up to Cyrname at Ascot in November. Photograph: Alan Crowhurst/Getty

Altior and Defi Du Seuil are two of eight entries for the Matchbook Clarence House Chase at Ascot.

Nicky Henderson’s Altior has not been seen in competitive action since suffering his first defeat in 20 starts over obstacles when runner-up to Cyrname in a much-anticipated clash at Ascot in November.

The 10-year-old missed an intended outing in last week’s Desert Orchid Chase due an abscess, but could return to defend his Clarence House crown on January 18th.

Defi Du Seuil is unbeaten in two starts this season for Philip Hobbs – making a successful reappearance in the Shloer Chase at Cheltenham before getting the better of the Willie Mullins-trained Un De Sceaux in a thrilling renewal of the Tingle Creek at Sandown.

The pair could renew rivalry in Berkshire, with Un De Sceaux given the option of bidding for a fourth win in this Grade One contest, having rattled off a hat-trick between 2016 and 2018.

The Flemensfirth gelding has not managed to get his head in front since seeing off the popular Cue Card in the 2018 Ascot Chase, but ran his best race since when beaten just a length into third in the Tingle Creek.

Meanwhile, Warren Greatrex could send La Bague Au Roi back to Leopardstown for next month’s Irish Gold Cup, as long as conditions are suitable.

The nine-year-old mare claimed Grade One glory in the Flogas Novice Chase at the Dublin track 12 months ago, but she has failed to strike in four subsequent starts.

She was beaten a length and a half in a mares’ Listed event at Doncaster on Sunday and Greatrex is now mulling a return to the top level in open company.

Greatrex said: “I will probably give her an entry in the three-mile Grade One at Leopardstown, but she would only go if the ground dried up sufficiently.

“She won there last year and I sometimes think we are too shy with these mares to keep them to their own sex – she proved it against the boys over there last year.”

Although Greatrex felt La Bague Au Roi should have won on her most recent start, he believes it was another step in the right direction.

He added: “I think the mares that finished in the first three at Doncaster were high class. Richard [Johnson] admitted he should have kicked on with her, but when a champion jockey comes in and says sorry, what can you do?

“What he did say was that she felt fantastic and as good as she has for a long time, which was good to hear.”

Stablemate Emitom could be stepped up to three miles in the galliardhomes.com Cleeve Hurdle at Cheltenham later this month after failing to beat a rival on his seasonal return in the Relkeel Hurdle at Prestbury Park on New Year’s Day.

He said: “Emitom didn’t jump a hurdle. He schooled well at home, but that is just him. If you don’t jump in races like that, you don’t get near them.

“We just gave him some intensive schooling, but it was his first run back from injury and last season I just went steady with him and he took a bit of time to get the hang of it.

“The engine is as good as it gets, but he needs to brush up everything else. A step up in trip might help. The plan was to come back for the Cleeve and it still might be.”