HRI unclear on where racing stands in Level 5 restrictions 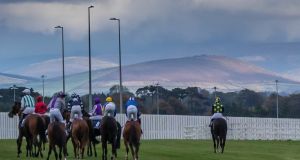 Runners and riders pull up after the final race of the day at the Curragh on Thursday. Photo: Morgan Treacy/Inpho

Horse Racing Ireland has said it will take its lead from government in relation to whether or not the sport can continue in the event of any move to Level 5 national lockdown due to the spread of Covid-19.

Some confusion appears to exist in relation to what will happen to elite sport, including racing, should the country move to the highest level of restriction as recommended again by the National Public Health Emergency Team on Friday.

Earlier this month a letter from the chief medical officer, Dr Tony Holohan, to the government outlined how there would be an “exemption for professional/elite/senior inter-county/horseracing behind closed doors” in the event of the country going to Level 5.

That seemed to contradict the official government roadmap for Covid-19, released in September, which stated “no matches or events to take place” at the top level of restriction.

An Tánaiste Leo Varadkar’s statement on Thursday that the GAA championship would be cancelled in the event of the country moving to Level 5 also appeared to run counter to the CMO’s letter.

Racing was the first major sport in Ireland to resume after lockdown on June 8th. It has been mostly staged behind closed doors apart from a short two-week period last month when up to 200 owners per meeting were allowed in.

HRI’s chief executive Brian Kavanagh said on Friday: “In the roadmap published in September it clearly said Levels 1 and 2 was racing with 500 and 200 people, and Levels 3 and 4 were behind closed doors. There was no mention of Level 5.

“Then when NPHET recommended Level 5 two weeks ago it said in the letter that horse racing would continue in Level 5.”

Kavanagh pointed to how racing can continue behind closed doors in the UK despite new top level restrictions imposed due to spiralling infection rates. Racing is also allowed to continue at the two tracks in the North, Down Royal and Downpatrick.

He also repeated how racing is well suited to social distancing once racegoers are removed from the equation.

Other observers have referenced how racing has continued uninterrupted behind closed doors in jurisdictions that have imposed lockdown measures to fight the virus, including Melbourne in Australia.

“In all these things we will take our lead from government. If and when the time comes for Level 5 we will enter discussions with government if that’s necessary,” Kavanagh added. “NPHET advises and government make decisions one way or the other.”

The HRI boss also said the manner of how extra funding given to HRI by the government in Tuesday’s budget will be distributed is going to be worked out over the next six weeks. In the budget the government handed racing a 14 per cent increase in funding to €76.8 million for 2021.

“Initial discussions will take place at our next board meeting on Monday and we will work out priorities in the coming four to six weeks ahead of publishing our budget for next year,” he said.

1 Gerry Thornley: After 32 weeks the Six Nations is back up for grabs
2 Extremes of sweet and sour for Solskjaer as Man United show signs of revival
3 Arsène Wenger: Arsenal was a matter of life and death to me
4 Bennett girding his loins for impossibly unpredictable Vuelta
5 Stockdale and Ringrose on board with expansive Irish game plan
Real news has value SUBSCRIBE