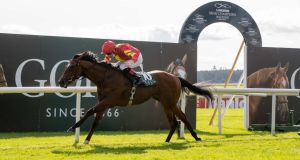 Thunder Moon is already among the market leaders for next year’s 2,000 Guineas. File photograph: Inpho

Juvenile championship honours are up for grabs at Newmarket on Saturday when Thunder Moon bids to add to Joseph O’Brien’s 2021 classic team in the Darley Dewhurst Stakes.

O’Brien has the 6-1 favourite for next year’s 1,000 Guineas in Pretty Gorgeous who landed Friday’s Bet 365 Fillies Mile at Newmarket under jockey Shane Crosse.

Thunder Moon is already among the market leaders for next year’s 2,000 Guineas and will put his unbeaten record on the line in a Dewhurst containing four other Irish hopes.

The Dewhurst’s record of identifying Europe’s leading two-year-old has been bolstered over the last three years with US Navy Flag, Too Darn Hot and Pinatubo all securing champion status.

The latter landed the Curragh’s National Stakes prior to the Dewhurst and Thunder Moon will try to complete the same double.

O’Brien won this as a rider on War Command for his father who gives the two colts that filled the National Stakes frame, Wembley and St Mark’s Basilica, another crack at Thunder Moon.

Aidan O’Brien has won the Dewhurst half a dozen times already, one more than the Jim Bolger-Kevin Manning team who this time rely on Poetic Flare, winner of his sole start last March.

Jessica Harrington’s Cadillac completes the Irish team on the back of his own impressive victory during last month’s Irish Champions Weekend.

Both Richard Hannon and Sheikh Hamdan are doubly represented with the supplemented Mill Reef winner Alkumait appearing to be the veteran owner’s top hope.

Hannon has been notably bullish about the home work being put in by his apparent main hope Chindit, although Etonian also is unbeaten.

Thunder Moon, however, looks to set the Group One standard. The National Stakes was a messy race but Thunder Moon hardly got the run of it. He did well, ultimately, to win with authority under Declan McDonogh who will try to break his cross-channel duck at the top level.

Willie Mullins aims to win the Newmarket Cesarewitch for a third year in a row when saddling Great White Shark for the marathon handicap.

In all eight Irish-trained runners take up the Cesarewitch challenge, half of them from Gavin Cromwell’s yard.

Mullins completed the English-Irish Cesarewitch double in style a year ago when Royal Illusion routed his opposition at the Curragh.

That horse is back for another crack at Sunday’s €75,000 feature at Irish racing’s HQ which the champion jumps trainer has won in three of the last five years.

Royal Illusion could find the weight concession to Run For Mary too much on this occasion though.

Charles Byrnes’ mare chased home no less than Princess Zoe in the big amateur handicap at Galway in July and has actually been dropped 1lb in the ratings on the back of that. Promising apprentice Sam Ewing takes a valuable 7lbs off her back.

Shoshone Warrior in the Cesarewitch is one of three rides Colin Keane has for Ballydoyle on Sunday’s card.

Another of them, Preamble, goes in the Group Three Anglesey Stakes. Soft ground will be no problem to the Fairyhouse scorer although his stable companion Lipizzaner is a more battle-hardened customer.

Internal Transfer exited at the 10th fence in that race at Listowel but is a triple winner at Limerick although, admittedly, he did fail to fire in last year’s Munster National.

Limerick’s flat programme on Saturday enables Dreal Deal to have his first start since controversially landing a handicap hurdle with ease at Navan last month.

The circumstances of the Ronan McNally-trained horse’s success, when winning at 6-4 having been 20-1 overnight, are being investigated by regulatory officials after a performance described by the jumps handicapper as being an improvement in excess of two stone.

The flat handicapper has given Dreal Deal a mark of just 45 for a 12-furlong handicap on Saturday.