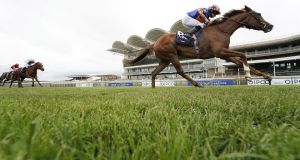 Aidan O’Brien has ruled his Classic filly Love out of any further action this year.

After contributing three of O’Brien’s dozen Group One victories to date this season the Guineas and Oaks winner won’t be seen in action again until resuming her career as a four year old.

“I would imagine that she won’t be trained on any longer with a view to having her next year,” the champion trainer said on Monday.

Having missed out on the Prix de l’Arc de Triomphe due to ground conditions – although the contaminated feed issue would have forced her withdrawal anyway – Love will also bypass the Breeders’ Cup at the which the mile and a half Turf contest had been an option.

Combined with Monday’s announcement that the dual-Arc and triple-King George heroine Enable has been retired it means Love’s stable companion Magical is finally front and centre at Saturday’s 10th Qipco British Champions Day at Ascot.

Magical never got the better of Enable during their enduring rivalry but is on target to try and complete the Irish-English Champion Stakes double for a second year in a row.

She also has the prospect of eclipsing no less than Frankel by becoming the first horse to win three times at the showpiece event.

Magical won the Filly & Mare event in 2018 but despite keeping her in that race again at Monday’s forfeit stage, O’Brien has the Champion Stakes in his sights.

“Nothing is confirmed but at the moment we’re thinking Magical in the Champion Stakes, and also Japan and Serpentine. Passion is in the Filly & Mare.

“We’re also thinking Sovereign in the two-mile race [Long Distance Cup], Lope Y Fernandez in the Sprint, and Circus Maximus and a couple of others in the Mile [QEII].” he said.

Magical beat Addeybb in last year’s Champion Stakes and could clash with that horse again although bookmakers rate the French Derby winner Mishriff as her biggest threat.

However the Irish mare goes into the race on a career-high having edged out no less than Ghaiyyath in an epic clash at last month’s Champion Stakes in Leopardstown.

The form of that race got a major boost when Sottsass, fourth at Leopardstown, subsequently emerged on top in the Arc at Longchamp.

Joseph O’Brien has kept open the option of running Patrick Sarsfield, runner up in the Prix Dollar over Arc weekend, in the Champion Stakes.

He also has kept Speak In Colours in the Sprint alongside Denis Hogan’s soft-ground loving speedster Make A Challenge.

Other likely Irish interest on Saturday includes Dermot Weld’s dual Irish Leger winner Search For A Song in the Long Distance Cup while Ger Lyons’s Curragh Oaks heroine Even So is in the Filly & Mare.

Search For A Song is set to face the triple Ascot Gold Cup winner Stradivarius who will attempt to bounce back from a disappointing effort behind Sottsass in the Arc.

That has turned out to be Enable’s last race after the mighty mare was retired to the paddocks on Monday. She will be covered by Juddmonte farm’s stallion Kingman in 2021.

Enable was ridden to all 11 of her Group One victories by Frankie Dettori who admitted to shedding a tear on news of her retirement.

“After walking back in after the Arc I was trying to enjoy it, as I knew in my heart it was going to be her last race. It is a tough task after finishing sixth in the Arc to have one more dance, so I half-expected this decision.

“It would have been unfair on her. Maybe she is now telling us something. But she has left the game in one piece and luckily for me she is still in Newmarket, so I can still see her. I will go feed her Polos at the stud, obviously not every day, but when I can,” Dettori said.

Enable was kept in training this year to try and complete a unique Prix de l’Arc de Triomphe hat-trick having agonisingly finished runner-up to Waldgeist in 2019.

However it was a first Arc victory, at Chantilly in 2017, that Dettori identified as the finest hour of a glittering career.

“The best performance was the first Arc. I knew I had the race won by the chateau in Chantilly. She was just in unbeatable form that day.

“The King George [2019] against Crystal Ocean stands out. She had every chance of throwing in the towel and she didn’t.

“The Oaks [2017] would be the other standout race as that is when she first really burst on to the scene,” he said.

Dettori can look forward to riding the hottest favourite at this Saturday’s Champions Day programme at Ascot with Palace Pier dominating the QEII betting.

The Prix Jacques Le Marois winner was immediately made as short as 8-11 market leader for the mile contest despite 17 others being left in it.