Brian O’Connor: John Oxx’s rare skill was never getting in the way of talent 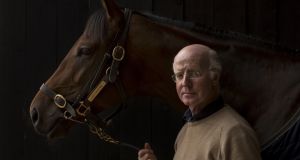 Trainer John Oxx with Sea the Stars, who won six Group One races in six months in 2009, including the 2,000 Guineas, the Derby and the Prix de l’Arc de Triomphe. Photograph: Morgan Treacy/Inpho

Maybe it’s a coincidence John Oxx revealed he isn’t renewing his licence next year on the same day racing headlines were otherwise crammed with news of Enable’s retirement. Those familiar with the man however are entitled to feel sceptical.

That’s because rarely has anyone ever seemed more congenitally allergic to fuss than the 70-year-old former champion trainer.

If so much of the culture now revolves around seeking attention then the calm, slight, bespectacled and endlessly reasonable man who masterminded the epochal career of Sea The Stars cuts an increasingly incongruous figure.

Oxx and hype have always been incompatible. In a sport filled with hustle and fanfare then the studious individual who qualified as a vet and graduated to global acclaim as one of the great practitioners of his craft never lost his facility for perspective.

If it didn’t appear helpful in digging a way out of a slump in recent years then it had already more than proved its worth during one of the most successful and acclaimed careers in Irish racing history.

With Oxx it has always been a case of form being temporary but class permanent.

So it’s easy to imagine the opportunity to try and slide notice of his own retirement under cover of Enable’s might have appealed. Oxx has always believed in letting the horses do the talking. Happily though it never prevented him from being a fount of good sense into the bargain.

It helps explain how in a notoriously catty game he has always been a hugely popular and respected figure.

“I can’t speak highly enough of the man or the trainer. He’s at the top of the list of both, up with the very best,” said his former ally Michael Kinane on Monday evening.

Together Oxx and Kinane masterminded the career of Sea The Stars, perhaps the finest thoroughbred ever to emerge from this country and the crowning glory of their own respective careers.

During 2009 the regally bred colt won at the highest level each month for six months.

The haul included the Derby, the Prix de l’Arc de Triomphe and the 2,000 Guineas, European racing’s greatest jewels. That Sea The Stars managed it while seeming never to be fully extended remains a source of awe for anyone in thrall to the sight of a top-class thoroughbred in full flight.

When he finished his Classic season with a never to be forgotten Arc victory no one could doubt they had witnessed perfection in equine form.

Typically Oxx himself quantified the significance of it better than anyone, describing the colt as the ultimate development of the thoroughbred species over 300 years. Just as typically he underplayed his own role in the story.

“Those great horses make it easy. They’re great and that’s it. You know that if you don’t make a mess of it, they’ll come through,” he said.

Racing history is littered however with stories of what might have been had trainers managed to overcome the impulse to train. Not getting in the way and instead patiently allowing talent to emerge in its own time has always been the hallmark of the greats.

That Oxx repeatedly allowed exceptional talents to flower, from his other Epsom Derby winner Sinndar, to the outstanding miler Ridgewood Pearl, the top sprinter Namid and stalwart stayers such as Alandi long since secured his status as one of Ireland’s greatest ever trainers.

When Alandi won the Prix du Cadran shortly after Sea The Stars’ Arc on that momentous day in Longchamp, no one could have predicted it would be the last of Oxx’s 33 career Group One victories.

Factors such as the financial crash and a split with the Aga Khan meant numbers slipped at the historic Currabeg stables on the Curragh. Having scaled the heights it must have the depths even more frustrating although one would never know from him personally.

On Monday night Oxx said he wasn’t going to dwell on that. He was reluctant to “make a meal of it”. Instead he said he was focusing on finding a tenant for the stables he himself took over from his father in 1979.

There have been almost 2,000 winners since then, a trainer’s championship in 1995 that emulated his father’s title in 1958, and a collection of champions topped off by one that ranks among the finest ever seen anywhere.

“No one could expect to train a horse like Sea The Stars. We were just so lucky to have him,” he said on Monday night.

If it seemed only right to point out that the horse was lucky too then a dismissive chuckle put an end to it.

It was left to Horse Racing Ireland’s chief executive Brian Kavanagh to apply the appropriate context.

“John has been a wonderful ambassador for our industry and our country, always a gentleman to deal with and generous with his time and knowledge. [It’s] truly the end of an era,” he said.