Positive tests for Zilpaterol in France could be ‘an isolated issue’ 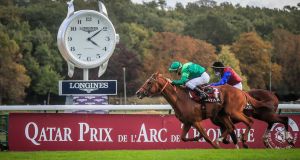 Irish racing’s regulatory body has said no detection of Zilpaterol in horses in Ireland and Britain could mean that positive tests for the prohibited substance in France were “an isolated issue”.

Traces of Zilpaterol, a drug unlicensed in Europe but which is used to fatten cattle in the US, were detected in horses in France last week and linked to a batch of contaminated feed from the Gain Equine Nutrition firm.

It led to a shambolic scenario at Sunday’s Prix de l’Arc de Triomphe meeting at Longchamp where Aidan O’Brien was forced into withdrawing his four runners from the Arc.

O’Brien and his sons, Joseph and Donnacha, had used Gain products but immediately switched to other feed once the problem came to light last week.

Amid uncertainty about how long any withdrawal period is for Zilpaterol, and ahead of Group 1 action at Newmarket later this week, the British Horseracing Authority (BHA) is offering elective and fast-tracked drug tests to trainers with concerns about a potential post-race positive sample.

Both the BHA and the Irish Horseracing Regulatory Board (IHRB) use the LGC lab in Newmarket to test samples.

An IHRB spokesman said on Tuesday: “There are a lot unknowns about this situation and we are continuing to investigate the whole matter with the various parties.

“There is no evidence of Zilpaterol detection in post-race samples from Ireland or Great Britain recently, and it could be a case that this was an isolated issue, possibly confined to a small number of batches. We don’t know for definite at this stage.”

The IHRB indicated on Tuesday that prioritised elective testing for Zilpaterol and other substances is also available to Irish trainers.

It said sample analysis, which costs about €150 plus VAT per sample, may take up to three working days.

However, even if there are no positive tests for Zilpaterol, questions are still likely to be asked as to why French testing systems uncovered the prohibited substance at a time when nothing was detected in Ireland and Britain.

An IHRB spokesman underlined that Zilpaterol is tested for here and added: “At this point we don’t see a need to step up the testing rate or measures. As has always been the case, elective testing is available for trainers.”

O’Brien and his sons have all declared runners in Ireland on Wednesday, with meetings at Navan and over jumps in Galway. All three trainers are also planning to have Group 1 runners at Newmarket later this week.

Declarations for Friday’s Bet365 Fillies’ Mile will be made on Wednesday. Donnacha and Joseph O’Brien handle two of the leading ante-post contenders, Shale and Pretty Gorgeous, respectively.

Joseph’s Thunder Moon may be joined by his father’s pair, St Mark’s Basilica and Wembley, in Saturday’s Dewhurst Stakes should the horses return negative test results.