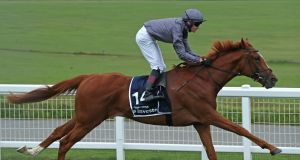 Serpentine is one of the horses to be withdrawn from the Prix de l’Arc de Triomphe. Photo: Jon Bromley/MI News/NurPhoto via Getty Images

Mogul and Serpentine are among four non-runners in the Prix de l’Arc de Triomphe after Ballydoyle withdrew all their horses from Sunday’s card at ParisLongchamp.

It emerged on Friday that Aidan O’Brien’s four runners had been fed with a product that could be contaminated with a banned substance - and subsequent tests at a French laboratory came up positive.

Ballydoyle released a statement confirming that while the horses in question could be clear of the contaminant by the time the card gets under way, they would be withdrawing all horses immediately.

That includes four in the Arc - Mogul, Serpentine, Japan and Sovereign - plus St Mark’s Basilica, who had been set to go off a short price for the Qatar Prix Jean-Luc Lagardere.

The statement read: “Unfortunately the results of the urine samples taken from the horses yesterday have come back positive from the French laboratory.

“There is a possibility that the contaminant may have left their system by the time of racing tomorrow however we have no guarantee of this and in order to protect the integrity of racing we have decided to withdraw all our horses from racing (at ParisLongchamp).

“Joseph and Donnacha O’Brien will do likewise.”

Joseph O’Brien had been set to saddle the well-fancied Pretty Gorgeous in the Qatar Prix Marcel Boussac with Donnacha’s sole representative, Fancy Blue, a notable absentee from the Prix de l’Opera.